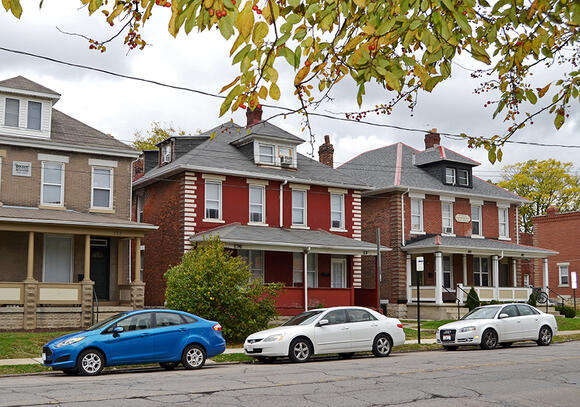 To aid students in their search, the Off-Campus and Commuter Student Engagement office suggests resources for students to see crime in off-campus areas before they sign a lease. Credit: Isabella Giannetto | Lantern File Photo

As students begin their search for off-campus housing, there are several factors to consider — and neighborhood safety may slip their mind.

Huffman said the office provides many resources to help students decide on a location, including a map marking bus stops and campus buildings. It also splits the off-campus area into eight zones, demonstrating their proximity to campus.

“We like to point students towards this interactive Google map,” Huffman said. “It’s sort of like a living resource, in that we often edit and update it and all changes are instantaneous and live.”

Julia Bliss, a third-year in food science and technology, said she heavily considered the safety of an area before signing her lease.

“My roommates ended up liking an apartment on Fourth Street better, and I just totally had a pit in my stomach about it,” Bliss said. “All the guys that were living there were telling us about how each of them have had their car broken into.”

After this experience, Bliss said she began using community crime maps to see how often crimes were reported in areas before going to see apartments.

“I was looking at a few of the crime maps,” Bliss said. “They were all saying East Campus, East Campus, it’s all over East Campus. So, I decided I wasn’t going to live there, and it’s the best thing I’ve ever done.”

Huffman said crime maps can help students make an educated decision on where they want to live.

“It kind of shows on a map the different crime that’s been happening in the area,” Huffman said. “It isn’t a fun thing to think about, but it’s the reality, and it allows us to make an informed decision based on data.”

Bliss said after extensive research, she believes she made the right decision by prioritizing low crime rates before signing a lease.

“I lived there last year, I live there this year and I just signed a lease for it next year,” Bliss said. “I’ve never felt unsafe in my apartment, ever.”