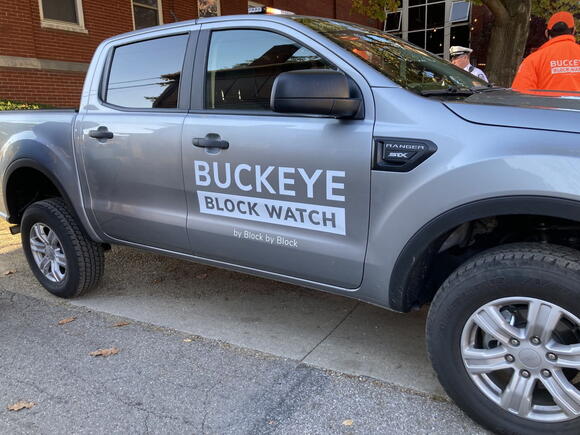 Ohio State will add another community patrol team to the off-campus area Wednesday through Saturday nights.

“This initiative encourages residents to play a role in getting to know one another and look out for another,” Johnson said. “Buckeye Block Watch reinforces that the University District is our neighborhood, a place where we take care of each other and are together as a community.”

Johnson said Buckeye Block Watch members, who are not sworn law enforcement and do not carry weapons, will patrol on foot, bike and in a vehicle Wednesday through Saturday from 7 p.m. to 3 a.m., with an increased presence on home football game days.

University spokesperson Dave Isaacs said Buckeye Block Watch employees are from both Community Crime Patrol and Block by Block, to provide more coverage of the off-campus area. Block by Block is a security services company whose members wear bright orange gear to be easily identifiable to the public, according to the Office of Student Life’s website .

According to the website, members receive “extensive training” in mental health responses, first aid, CPR and other situations.

TJ Logan, associate vice president for the residential experience in the Office of Student Life, said the university introduced Buckeye Block Watch after listening to the community.

“Buckeye Block Watch is really just an evolution and continued work that we’re doing to try to keep our students safe in the adjacent communities to campus,” Logan said.

Angela Fredriksson, co-founder of Buckeyes for a Safe Ohio State, a parent group which promotes student safety, said she believes Buckeye Block Watch will be a positive supplement to the police presence around campus.

“I think that for those that may not be comfortable or wanting to use the services of the police, I feel that it gives those students and community members an additional safety resource that they can hopefully feel comfortable going to,” Fredriksson said.

Fredriksson said while she believes the program is a step in the right direction, she’d like to see the increased game day patrols each day of the week.

Logan said these patrol members aim to protect everyone in the off-campus area.

“It’s about folks who are a part of that community who are engaging with students who understand who our students are,” Logan said.