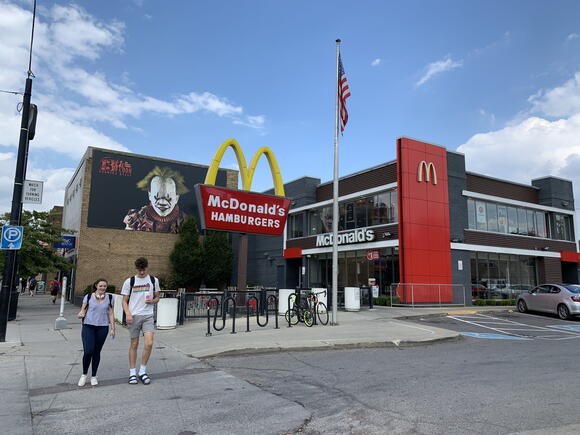 A shooting Monday evening at the McDonald’s at 1972 N. High St. near campus did not result in a neighborhood safety notice or Buckeye Alert, unlike the similar incident that occurred just two years ago .

“ Public safety professionals must determine what is credible, and noteworthy information, and we hold ourselves to the highest standards,” Hedman said.

At the Monday shooting, a woman was open carrying a handgun in the building while picking up an Uber Eats order, according to a report from the Columbus Division of Police. The suspect took the gun from her open holster and then fled on foot.

The woman and her daughter pursued the suspect on foot before he turned and yelled “Back off!” while pointing the gun at them, according to the report. The suspect then fired a shot “wildly in their direction.”

According to the report, no injuries were reported.

Columbus Police Sgt. James Fuqua said Thursday no arrests have been made.

According to the Department of Public Safety’s website , neighborhood safety notices — which are issued for off-campus incidents — are determined based on factors such as known information about the crime, continued threat and timeliness of information received, proximity to campus, victim’s affiliation to the university and risk of interfering with the criminal investigation of outside law enforcement.

Ohio State is not required to issue a neighborhood safety notice when a crime occurs in the off-campus area.

Buckeye Alerts are issued “when it is determined that the campus community needs to take immediate action to remain safe,” according to the Department of Public Safety website .

These alerts differ from public safety notices, which are issued for incidents that take place on campus and are required by the Clery Act , a protection law that ensures transparency around campus crime policy and statistics.

An Aug. 25, 2019, shooting at the same McDonald’s left one person stable and prompted a Buckeye Alert. The victim was shot once in his thigh after the suspect fired several times in the parking lot.

A neighborhood safety notice was prompted March 5 by a strong-arm robbery of an Ohio State student and his friend behind the McDonald’s. The student was transported to a nearby hospital.

At the time, that was more than three times the number of calls reported from three other 24/7 food-selling businesses nearby.

Anyone with information regarding the Monday shooting is encouraged to call Columbus Police at 614-645-4545.