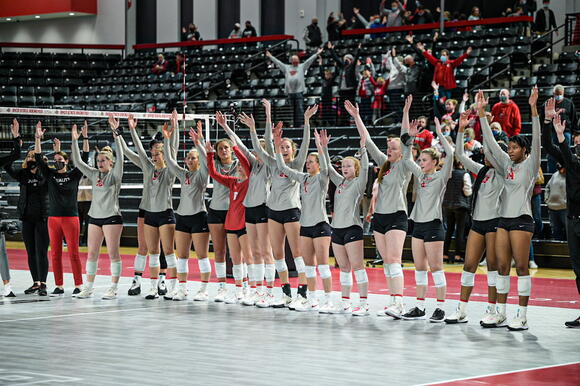 The No. 7 Ohio State women’s volleyball team lost 3-1 against No. 11 Minnesota Thursday at the Covelli Center for the Buckeyes’ first home loss of the season.

Minnesota (15-6) entered the match with a 9-3 record in the Big Ten Conference, which put them at third place in the standings. Ohio State (18-5) got swept by the Gophers in the teams’ last meeting Oct. 24 in Minneapolis.

“I’m upset, but I think we did a lot of good things,” junior libero Kylie Murr said. “We had the momentum and we were doing all the right things, but we couldn’t finish.”

It was point-for-point to start the first set until Ohio State took an 8-5 lead after a block by junior setter Mac Podraza and sophomore middle blocker Rylee Rader. However, Minnesota was able to tie the set at 10-all from a solo block by redshirt senior outside hitter Airi Miyabe. A missed serve by the Buckeyes put Ohio State down one point at the media timeout, 15-14.

Out of the break, a service ace by Rader put the Buckeyes up one point and forced Minnesota to take its first timeout at 18-17. A quick rebound from the Gophers forced Ohio State to take a timeout of its own down 20-18. After the timeout exchange, a thunderous kill by redshirt senior middle blocker Katie Myers gave the Gophers the momentum they needed to close out the first set, 25-23.

The Buckeyes were the first to take a lead in the second set after a kill by freshman middle blocker Arica Davis, 6-4. A big dig by Murr forced Minnesota to take a timeout, 9-5. The Buckeyes kept their momentum out of the timeout, going on a 3-0 run and forcing another Gophers timeout at 13-6.

A kill by sophomore outside hitter Jenna Wenaas stopped the Buckeyes run, but tough defense kept Ohio State in the lead by seven. A phenomenal dig by Murr helped the Buckeyes win a long rally to keep their lead, 19-13. A strong serving and defensive performance by the Buckeyes helped them close out the second set 25-16.

Minnesota got off to a quick 5-0 lead in the third set off of a service run by junior defensive specialist Rachel KilKelly. Tough serving by senior outside hitter Gabby Gonzales put Ohio State on the board, 8-5. However, an ace by Myers forced Ohio State to take a timeout, 12-6.

Davis got a kill out of the timeout, but it was followed up by a 4-0 run by the Gophers to force another Ohio State timeout, 16-7. Minnesota continued to have the momentum out of the break with back-to-back blocks, 19-7. An ace by Gonzales gave the Buckeyes a little energy, but the Gophers were able to close out set three, 25-15.

A dynamic kill by Davis, followed by a monster solo block by senior outside hitter Mia Grunze, put Ohio State ahead in the fourth set at 8-4. However, Minnesota followed that up with a kill by redshirt senior opposite hitter Stephanie Samedy to put the Gophers within two points, 12-10. A great get by Murr put Ohio State ahead at the media timeout, 15-12.

Out of the timeout, another big kill by Davis kept the Buckeyes ahead, but aggressive serving by sophomore setter Melani Shaffmaster forced Ohio State to take a timeout at 18-17. The Gophers’ 4-0 run was stopped by a kill from Gonzales to give the Buckeyes a one-point edge, 19-18. The remainder of the set was point-for-point until a block by Myers and KilKelly won Minnesota the match, 25-23.

“Moving forward we just need to stay confident in ourselves and take it to them.” Davis said. “We need to keep pushing and keep working hard. We need to put our work into action, and I know that we will.”

The Buckeyes loss makes them 2-5 against ranked opponents, but the team is hungry to turn that around, head coach Jen Flynn Oldenburg said.

“We’ve learned a lot and we’re tired of learning, like, let’s start acting on what we’re learning,” Oldenburg said. “Moving forward, we’re going to have a lot of that action from the team. I can see it in their eyes”

Ohio State will take on No. 9 Nebraska Saturday at 7 p.m. in the Covelli Center.