Football: No. 5 Ohio State hits the road for a meeting with Nebraska 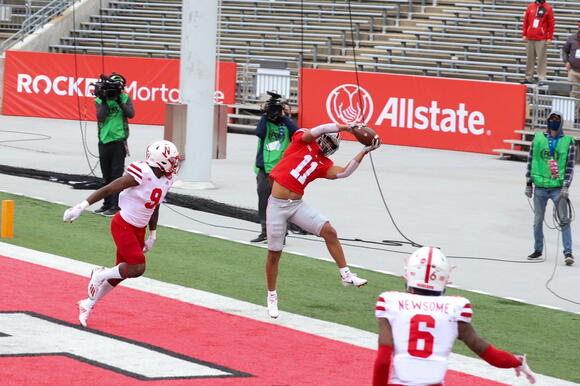 On the outside looking in after the initial College Football Playoff rankings , No. 5 Ohio State looks to make a statement on the road against Nebraska.

The Buckeyes (7-1, 5-0 Big Ten) make their longest trip of the regular season to Lincoln, Nebraska, with a chip on their shoulder after being ranked outside of the four playoff spots. The Cornhuskers (3-6, 1-5 Big Ten) sport a team that is much better than their record indicates — with all six of their losses coming by eight points or less.

Nebraska has seen three losses against teams in playoff contention, but played each team tough. The Cornhuskers pushed No. 3 Michigan State to overtime, while falling to No. 7 Michigan by a field goal and No. 8 Oklahoma by a touchdown.

Ohio State head coach Ryan Day stressed the importance for his team to not look past a dynamic challenge in Nebraska.

“They played team up north tough, they played Oklahoma tough, they played Michigan State tough and I’ve been very impressed with them,” Day said. “Just like any other game in the Big Ten, especially when you go on the road, this is going to be a battle.”

With attention to Nebraska’s near-upsets of top 10 opponents, Day said the program is close to a major turnaround under head coach Scott Frost — who has a 15-26 record in four seasons with the Cornhuskers.

“I think they’re very close. When you look at the way they’ve played this year, they’ve played strong and they have a good team,” Day said. “They have good coaches and they’re playing well. They’ve come up short in some of these games, but I know they’re very dangerous.”

For the past four seasons, redshirt junior quarterback Adrian Martinez has been Frost’s choice behind center. Although it has been tumultuous at times, Martinez has put the pieces together in 2021.

Martinez has completed 62.5 percent of his passes for 2,265 yards — third-most in the Big Ten — alongside 12 touchdowns and seven interceptions. Senior wide receiver Samori Toure has emerged as Martinez’s favorite target and a deep threat for the Cornhuskers, averaging a conference-best 19.6 yards per catch.

But, Martinez’s arm isn’t the only threat in his game.

The Fresno, California, native has proved to be the best dual-threat quarterback in the conference, rushing for 11 touchdowns on the season — third-most in the Big Ten. Martinez adds 451 rushing yards on the season and averages 50.3 running yards per game.

Behind Martinez’s dual-threat ability, the Cornhuskers boast the second-best total offense in the Big Ten, averaging 470.1 yards per game.

“They just got a lot of speed. They’re just very talented on the offensive side of the ball,” sophomore safety Bryson Shaw said. “[They have a] very dynamic quarterback in Martinez, who’s going to give us a lot of different looks. But, we’ll be ready for it.”

On defense, Frost’s bunch finds itself in the middle of the pack in the Big Ten.

Allowing 348.8 yards and 20.3 points per game, the Cornhusker defense has shut down top-tier offenses on numerous occasions this season. Nebraska held sixth-ranked scoring offense Oklahoma — who puts up nearly 43 points per game — to just 23 points, while keeping Michigan State, who typically scores a touch under 35 points per game, to that same total.

Nebraska’s defense starts with its secondary, primarily due to the efforts of junior cornerback Cam Taylor-Britt and senior safety Deontai Williams.

Williams ranks tied atop the Big Ten with four interceptions thus far this season, while adding three pass breakups. Taylor-Britt has picked up eight pass breakups — tied for second in the conference — and a single interception off the arm of Minnesota redshirt senior gunslinger Tanner Morgan.

“They’re good, they’re really good in the backend,” senior wide receiver Chris Olave said. “That’s an underrated team. They’re going to hit hard, they’re big, fast. So we’re going to have to bring our A game into a tough environment.”

As the Cornhuskers have pushed plenty of playoff-eligible teams to the brink, Day said Nebraska passes the eye test of a strong team and the Buckeyes must remain diligent in order to not fall victim to “The Sea of Red.”

“You could look at the record if you want, or you can watch the film and realize what you’ve got here,” Day said. “If you watch across the country, week in and week out, a lot of things have happened this year. We can’t let that happen to us. We can’t have any regrets.”