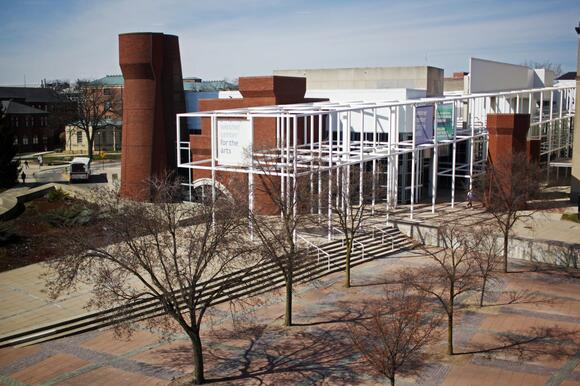 The Department of Theatre, Film and Media Arts will host its annual event DigiEYE at the Wexner Center for the Arts Tuesday. Credit: Ris Twigg | Lantern File Photo

Student-made films will hit the big screen through an event hosted by the Department of Theatre, Film and Media Arts at the Wexner Center for the Arts.

DigiEYE is an annual evening screening of live-action and animated short films from undergraduate and graduate students, Janet Parrott, associate professor in and vice chair of the Department of Theatre, Film and Media Arts, said. She said the event, which will be held at the Wexner Center Tuesday at 7 p.m., has been around since 2005.

“It’s a great opportunity for students to see their work big on a screen and in front of an audience, because an audience really will tell you if those moments that you wanted people to laugh or to feel something, that they accomplish that,” Parrott said.

Parrott said she puts the event together by compiling videos made by students for different classes within the department. She then selects the videos that will be presented based on the length of the show and the general theme that will tie them together.

“Because it is a curated show, there are choices being made into making it into a really cohesive thing,” Parrott said.

Parrott said she wants to celebrate what Ohio State students are doing with screen media and highlight the value in students showing their work to the community.

Jeremy Schwochow, a fifth-year in moving-image production and film studies, said he has attended DigiEYE before and believes it is important for other filmmakers to attend film screenings to pick up and celebrate ideas from others.

“I think it’s super important and very exciting to see what people your age group or peers see what they’re making, and kind of just be able to celebrate that,” Schwochow said.

Parrott said DigiEYE is also a great opportunity for the Columbus community to come and see students’ work firsthand.

“They are short pieces that you sort of see how people are thinking right now, and things that students care about,” Parrott said.

Schwochow said art — especially filmmaking — is a great form of communication and can benefit the Ohio State community as a whole.

“It’s important for everyone at Ohio State to experience and open their perspective to artists and different people that have different lives and experiences,” Schwochow said.

DigiEYE will be held from 7 to 8:30 p.m. The event is open to the public and admission is free.