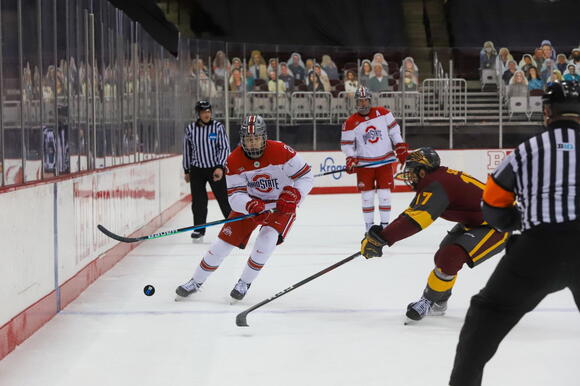 Beginning college as a freshman over 20 years old is not common for most people.

However,  it allowed for more growth as student-athletes for three Buckeyes.

Emily Armstrong, Cole McWard and Jaedon Leslie are all athletes who arrived at Ohio State at a bit of an older age. Due to either their sport or personal situation, all three got a late start to college life — putting them in the unique situation of being older than their peers.

Armstrong, a 21-year-old freshman synchronized swimmer, said she lived on her own for three years before she came to Ohio State.

Armstrong was on Canada’s Senior National Team for three years and said she participated in online classes at a university in Canada. She knew she wanted to continue swimming after the 2020 Tokyo Olympics, so she decided to apply to schools in the U.S. because of the athletic programs offered.

Ohio State ended up being the school for her, Armstrong said.

“The school spirit, the synchro team is better than it is anywhere else, and I had some friends come here that I only ever heard good things about,” Armstrong said.

It is common for men’s ice hockey athletes to start college at a later age because they often play in junior leagues for a few years following high school.

McWard, a 20-year-old freshman hockey player, said he left his hometown of Fenton, Missouri, his senior year of high school to go play in the United States Hockey League in Kearney, Nebraska, for three years. He said this extra time helped him mature and feel more prepared to start college.

“I’m definitely more of an adult now than I was when I was 18,” McWard said. “Giving myself time to develop, as far as hockey goes, was big, and as a person, handling everything off the ice, academically, it has definitely helped in that aspect.”

Socially, McWard said he was a little nervous to tell people his age and grade when he started school this year.

“It’s kind of difficult to tell someone that you’re 20 years old as a freshman. They kind of look at you crazy,” McWard said. “I’m constantly thinking, ‘Are people going to think I’m weird?’ It’s just an awkward conversation, but then people don’t care if you’re 20 or 18.”

McWard said he is grateful for being a bit older than other freshmen because he feels the maturity allows him to enjoy his time at college more.

Before deciding to join the Buckeyes, McWard said he had previously committed to play at the University of Michigan. However, he changed his mind his senior year of high school. .

“I don’t think you could really go wrong with a school like this,” McWard said. “I think it all worked out really well and I couldn’t be happier to be a Buckeye.”

His teammate, Leslie, a junior hockey player, said he began college even later than McWard, starting as a freshman at 21 years old.

Leslie said he played juniors in Canada for four years starting his senior year of high school. He said he appreciated the extra time to mature because it allowed him to feel more prepared.

“You hear a lot about kids coming into college and they struggle with homesickness,” Leslie said. “I feel like hockey players, lots of us have had the experience in juniors where you are living away from home, so I think that helps you mature and progresses you from being comfortable with living away from home at a young age. So when you come to college, it’s a pretty easy transition to live on your own.”

Leslie said he is thankful that he looks younger than others  his age because it is easier to make friends and meet new people.

“You obviously know you’re a little bit older than them. Luckily for most of us, we’re still kind of baby-faced, so I think we fit in pretty well,” Leslie said.

Following his fourth year of playing in the junior leagues, Leslie said he was ready to attend and play for a college. When Ohio State came calling, Leslie said it was a simple decision.

“Ultimately, when the coaches presented their recruiting piece to me and I saw the campus, I fell in love instantly and knew there was no other place I wanted to go to,” Leslie said. “It was a pretty easy choice.”