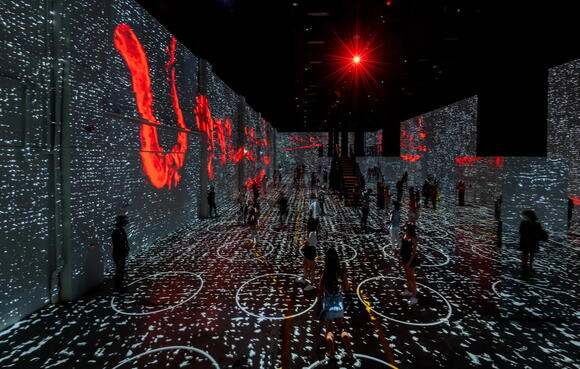 The art of Vincent van Gogh has captivated audiences for centuries and now, viewers are invited to watch his paintings come to life at the “Immersive Van Gogh” exhibit.

The long-awaited exhibit, which opened at Lighthouse ArtSpace in Columbus Oct. 28 and will be on view through Feb. 6, 2022, uses 500,000 cubic feet of projections to surround visitors with an animated film of Van Gogh’s work, Corey Ross, producer of the exhibit, said. Ross said the exhibit is designed to highlight the intricacy and beauty of Van Gogh’s art in a way that viewers rarely get to experience at traditional museums.

“You’re seeing Van Gogh’s art projected on a size and a scale that you never would,” Ross said. “That allows you to see brushstrokes and paint speckles and technique under the microscope — so to speak — in a way that would be normally difficult to do in a museum.”

Ross said the exhibit is designed to be participatory and gives viewers the freedom to choose how they experience some of Van Gogh’s most famous pieces, including “The Starry Night,” “The Bedroom” and “Sunflowers.”

“You are participating in the show as you walk through,” Ross said. “You choose where you go in the gallery, and where you stand or whether you sit, and what time you come, and when you leave and how long you stay in it.”

The experience is accompanied by an emotional musical soundtrack created by composer and pianist Luca Longobardi, according to the exhibit’s website . Natasha Abramova, operations and special projects manager for the exhibit, said she feels the music enhances the viewer’s experience.

“They’re trying to focus on what is happening and then, at the same time, listen to what is happening,” Abramova said. “It’s a combination of the visual and musical creativity of our artists.”

The first iteration of the exhibit, created by installation artist Massimiliano Siccardi in Paris,  accelerated in its rise to fame after being featured in the Netflix show “Emily in Paris,” Ross said. The exhibit has since expanded into other parts of the world, he said, selling over 3.5 million tickets so far in North America.

Ross said Siccardi decided to feature the works of Van Gogh in the exhibit because of his art’s inspirational and familiar nature. He said Van Gogh’s art has proven to be timeless, especially in the wake of the pandemic.

“The interesting thing about Van Gogh is that the work still survives and is still interesting and still touches people 130 years after he passed away,” Ross said. “That message is hopeful and cathartic, to think that even when we’re having difficult times, that the art transcends and moves us beyond that.”

Abramova said the exhibit is unique because Siccardi was not only inspired by Van Gogh’s art, but also by his life story.

“It’s a very human approach to the life of an artist who wasn’t recognized during his life and then became a pop star in the blink of a century,” Abramova said. “Maybe our task now is to bring him more to the classical arena, to tell people that this is the life of a person — who lived in the 19th century — who wanted to be an artist, who was a great artist.”

The exhibit will not be the only Van Gogh art exhibition in Columbus this fall. The Columbus Museum of Art will be displaying its Van Gogh exhibition, “Through Vincent’s Eyes: Van Gogh and His Sources,” from Nov. 12 through Feb. 6, 2022, according to its website . Ross said he feels the two shows are complementary.

“This is not about a replacement for art galleries, there should be no reason why in Columbus you would go to see one and not go to see the other,” Ross said. “This is about a new tool and a new genre. I think it’s going to — in the future — bring together all sorts of things that we know of today, and allow artists some flexibility to do something completely different.”

Tickets to the “Immersive Van Gogh” exhibit vary in price. More information can be found on the exhibit website .