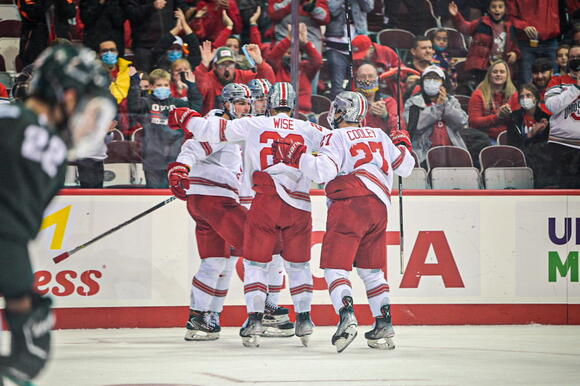 The Buckeyes had to scratch and crawl to avoid falling behind early Saturday and once they did, a complete team performance allowed them to coast to victory.

Junior forward Jaedon Leslie was ecstatic with the response he and his teammates showed following a tough loss in the series opener.

“It’s an awesome feeling,” Leslie said. “Anytime you can bounce back like that and have everyone contribute, it’s awesome. Everyone in the room chipped in tonight and we got the result from it.”

The fans in attendance inside the Schottenstein Center were treated to fireworks early in this one when, after only 1:09 into the first period, senior forward Quinn Preston, one of two alternate captains for Ohio State, was sent to the showers for checking from behind.

Not only did Preston’s penalty put Michigan State on the power play for five minutes, but it left the Buckeyes without one of their leaders for the remaining 59 minutes.

Preston’s teammates didn’t drop their heads, however, as sophomore forward Patrick Guzzo scored a shorthanded goal with 17:27 remaining in the opening period. Guzzo gathered the rebound after graduate forward Eric Cooley hit the post and lit the lamp for the Buckeyes, giving them an early 1-0 lead.

Cooley earned an assist on the play, his first as a Buckeye and the 50th of his collegiate career after tallying 49 across four seasons at Niagara University.

Ohio State head coach Steve Rohlik said he was disappointed to see Preston pick up a game misconduct penalty, but he loved how his team came together and answered the bell.

“That’s just kind of how our team is,” Rohlik said. “I mean, everybody’s behind one another. Some mistakes happen, you get a penalty like that, other guys are there to step up and that’s exactly what these guys do.”

Redshirt junior Kamil Sadlocha nearly added another shorthanded goal a few minutes later, but his shot was kept out by the crossbar. The Buckeyes proceeded to successfully kill off the remainder of the major penalty, holding Michigan State to just one shot in the process.

After the game, Rohlik once again highlighted the importance of winning on special teams, the penalty kill unit in particular.

“Anytime you can win the special teams battle you’ve probably got a pretty good chance of winning the game,” Rohlik said. “Especially when you get a five-minute major, your penalty kill has really got to step up and tonight it was big for us.”

The first 20 minutes weren’t pretty as the Buckeyes and Spartans combined for seven penalties and 33 total penalty minutes, including a misconduct penalty that was handed to freshman defenseman Mason Lohrei. He was forced to spend the final 11:16 in the box.

For the second-consecutive game, a power-play goal from junior forward Josh Nodler put Michigan State on the board, tying things at one with 8:13 remaining in the second period. The goal was Nodler’s third goal of the season and gave him three points for the series.

The Buckeyes retook the lead with 3:42 remaining in the period, as junior forward Mark Cheremeta grabbed a flying puck out of the air, put it on his stick and fired a shot past the Spartans’ goaltender. Cheremeta’s goal was assisted by Cooley, his second of the game.

Ohio State carried a 2-1 lead into the third period, alongside a 23-12 advantage in the shot department.

Leslie thought the whole team played well defensively against the Spartans and highlighted the importance of buying in and being persistent without the puck.

“We’re pressuring pucks down low, and we got good support all around the ice,” Leslie said. “Wingers are making plays on the walls getting pucks out and the D is moving it up quickly. I think that attributes to how we’re really relentless in our own end and making sure we’re keeping it tight and away from our own net.”

The score remained 2-1 until senior defenseman Ryan O’Connell’s shot from the blue line took a deflection and trickled past senior goalie Drew DeRidder with 12:44 to play, giving the Buckeyes the two-goal advantage they coveted.

Sadlocha and Guzzo tallied assists on O’Connell’s goal, their first and second helpers of the year.

Senior forward Gustaf Westlund added an empty-net goal and Leslie found the back of the net with 52 seconds remaining for the Buckeyes’ fourth and fifth goals of the contest.

Freshman forward Cam Thiesing picked up the second assist of his career on Leslie’s goal, something that didn’t go unnoticed by the Canadian.

“Cam made a great play turning the puck over in the neutral zone and he put a puck on net,” Leslie said. “I was driving the net hoping it squeezed out behind him and luckily it did. It’s a good feeling.”

Leslie said he’s looking forward to getting back at it in practice on Monday, emphasizing that it’s the work put in during the week that leads to wins like this one.

“Just a great week of practice,” Leslie said. “Every week we got to get better in practice, making sure we’re pushing each other. I think if we can do that, then we’re going to be a very strong team to beat.

Ohio State returns to the ice next weekend against Penn State, hosting the Nittany Lions for a two-game series Friday and Saturday.