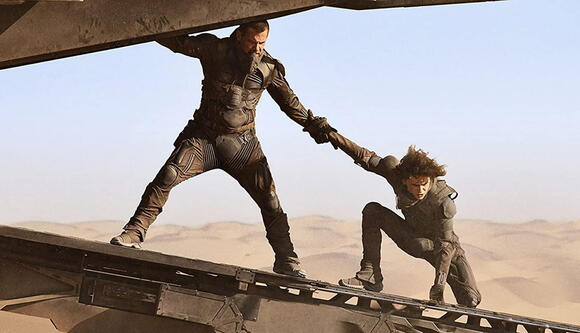 For many people, “Dune” has been the most anticipated film of the last decade, and despite being delayed time and time again, it delivered big. Thanks to outstanding directing, acting, production and score, this film is everything one could ask for. To those looking to transcend into a new world with an epic scope and genuine characters, look no further: “Dune” has all of this and more.

Set thousands of years in the future in a feudal interstellar society where noble houses control planets and their resources, the film follows Paul Atreides (Timothée Chalamet), a gifted young man who embarks on an epic journey on the most dangerous planet in the universe, Arrakis. There, he encounters betrayal, enormous sandworms and a destiny that has been foreseen for thousands of years.

With so much detail densely packed into the novel, on top of several failed adaptation attempts in 1984 and 2000, many felt “Dune” was too difficult to adapt into a film. However, Villeneuve accepted the challenge, and due to an obvious love of the source material, the movie is not only a success but a breakthrough in expanding the boundaries of what science fiction can be on the big screen.

There is no doubt Villeneuve had great support; the cast features many A-list actors, and the legendary Hans Zimmer composed a score unlike anything heard before. On top of that, Legendary Entertainment and Warner Brothers gave the movie a budget of $165 million.

There are few actors as popular as the continually up-and-coming Chalamet. His stoic, nuanced portrayal of Paul Atreides is some of his best acting yet, leading viewers to connect with and care for the protagonist.

Rebecca Ferguson is another clear standout in this film, and her performance as Lady Jessica is one for the ages. She is poised and proud, but she is also a mother who loves her son more than anything, and her raw emotion on the screen is captivating.

Shot exclusively with IMAX digital cameras to optimize the viewing experience, this film is meant to be seen on the biggest screen possible, and the breathtaking score from Zimmer will make the audience’s seats shake in one of the best in-theater experiences of the last decade.

Though many expected Roger Deakins to oversee cinematography after previous collaborations with Villeneuve on projects such as “Blade Runner 2049” and “Prisoners,” it was cinematographer Greig Fraser who delivered some of the most jaw-dropping shots to ever be featured on the big screen. Every moment on screen feels otherworldly, and that may be the most impressive aspect of the whole film.

As far as storytelling goes, Villeneuve knocks it out of the park. He remains faithful to the source material, quoting the book word for word in many cases. However, he still incorporates his own unique vision of the world, which is, ironically, part of what makes it so authentic.

This film is the first installment in a two-part series, which is a smart move, and likely more than just a ploy to squeeze as much money out of the title as possible. Rather, this will allow for a more faithful adaptation of an incredibly dense novel, without omitting important plot points and character development.

Because the story was split to allow for a sequel, the film incorporates plenty of exposition, introducing viewers to the fictional drug “melange,” which runs the universe, showing the ways of the religious sisterhood known as the Bene Gesserit and setting up the imperial feud between noble houses. These details are important to the lore and result in incredible worldbuilding.

“Dune” is nothing shy of a masterpiece, and there cannot be enough said about the boundaries it breaks while establishing the dense world of Herbert’s novel. As of Wednesday, Legendary Entertainment and Chalamet confirmed “Dune” will get a sequel.

In line with Chani’s (Zendaya) last words to Paul in the film, “this is just the beginning.” It appears as though this incredible story will continue to unfold on the big screen.

Dune is available in theaters now and streaming on HBO Max.