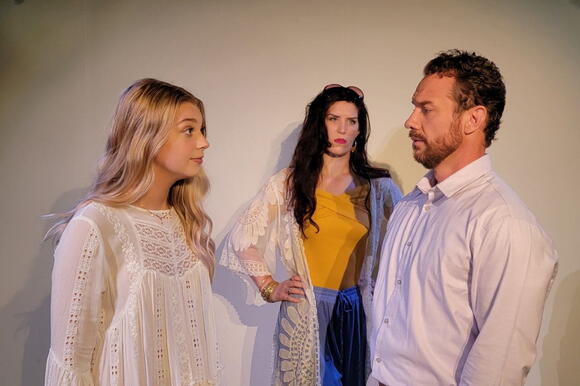 (left to right) Casey Kuhlman as Nina, Devin Reeves as Arkadina and Jamie Harper as Trigorin in the Ohio State Department of Theatre, Film, and Media Arts’ production of “The Seagull.” Credit: Courtesy of J. Briggs Cormier

After almost two years online, Ohio State’s Department of Theatre, Film, and Media Arts is debuting a live and in-person production of Anton Chekhov’s “The Seagull.”

J Briggs Cormier, director of the play and the department’s external relations coordinator, said the anticipation for opening night is both electrifying and nerve-wracking. Starting Wednesday, Ohio State students will tackle the historically acclaimed comedy while employing a contemporary lens via concept and costuming. He said the show’s tragic twists and turns, coupled with its complex themes, make for a powerful comeback performance.

“It’s about love, but unrequited love in particular,” Cormier said. “This play has three sets of characters who are all loving someone who is not loving them back. It’s also about art, talent and family, but the big theme is unrequited love.”

Cormier said the production’s rehearsal process has been challenging for many reasons, such as mask requirements during rehearsals, which makes it more difficult for actors to expressively communicate, and losing valuable rehearsal time due to the Drake Performance and Event Center’s air conditioning system being down. However, Cormier said it is still possible to create quality theater, even with these barriers.

“The cast and crew have really stepped up to the task,” he said. “They’ve done a great job, and I think we’re still going to be ready for opening night.”

Annie Ratanapan, a cast member and a third-year in theatre and economics, said pandemic-related complications pushed them and their castmates to more thoughtfully dissect the script. Ratanapan portrays Masha, an estate manager’s daughter tormented by her own one-sided affections.

“We had to think about how our voices and our physicality represented the characters individually,” Ratanapan said. “That way, when we acted with each other on stage, we were still able to fully project the notions of our characters. Even though our words are a bit outdated, the relationships between the characters in the show are timeless.”

Considering affairs of the heart are major plot elements, the pandemic’s demand for distance proved to be another obstacle, Cormier said. However, he said this inspired even more performance- and technology-based creativity.

“In the stage directions, there is kissing,” Cormier said. “Our intimacy choreographer had to find other ways of staging those moments that would still express what’s going on without actually having the actors kiss.”

Amid adversity when preparing for the performance, a silver lining emerged with a special mask exemption, Ratanapan said. Actors must wear masks backstage and in the wings but are no longer required to wear them during their stage time, a decision the university made over fall break. Performers who will be going maskless on stage are required to be tested three times a week.

This exemption is in line with the Sept. 10 Columbus executive order mandating masks be worn when entering a publicly accessible indoor space, with exemptions given to several groups, including children under the age of six and people actively eating or giving a performance, according to a City of Columbus press release .

“I had a moment when I was standing on the stage, which was fully put together with the lights on, my costume on, and I thought, ‘This is what live theater is supposed to be like,’ ” Ratanapan said. “I’m very grateful for the art I was able to create during the pandemic with Zoom productions, but to be back in person was the most spectacular feeling.”

Cormier said he felt similarly and that the exemption overrides many previous disappointments, allowing for a greater degree of unrestricted artistry.

“I think the arts, including theater, help us understand the world we live in,” he said. “When you get caught up in an experience, and the performing arts does it viscerally, it’s because you’re there experiencing something collectively.”

“The Seagull” will run Wednesday to Nov. 6 from 7:30 to 9:30 p.m. in the Roy Bowen Theatre. Tickets may be purchased online or in person at the Ohio State Theatre Ticket Office.