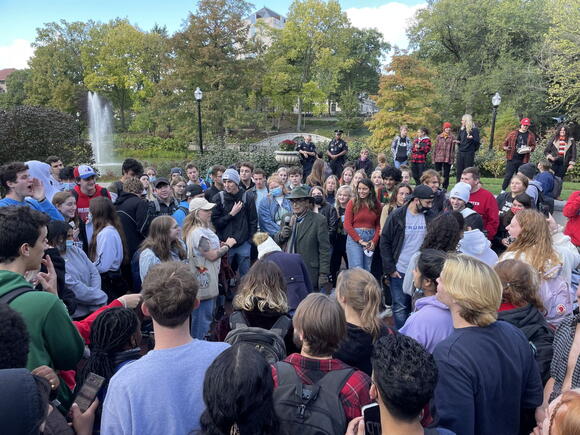 TikTok preacher Sister Cindy posted a video Tuesday asking if, “Ohio State Buckeyes were ready for good old-fashioned shaming,” and said her “show” would begin around 1 p.m. at Browning Amphitheater.

A crowd of about 300 students gathered by Mirror Lake in response to Cindy Smock and her husband Jed Smock, also known as Brother Jed, with mixed reactions. The self-named “Campus Preacher” Sister Cindy, known for her “slut-shaming,” has garnered over 364,000 followers and 5.2 million likes across all her videos on TikTok.

“I think she brings a lot of negative attention to her, but people just want to see what she has to say so they can say something back,” Riley Patrick, a second-year in athletic training, said.

The couple stood on the Browning Amphitheater stage with a microphone and a few signs, sharing their opposition to premarital sex, gender and race equality and homosexuality, telling one student to “pray the gay away.”

Brother Jed said their reasoning for being there was to “preach the word of God.”

“The last thing Jesus said to his disciples before sending them to Heaven, ‘Go to all the world and preach the gospel,’ ” Brother Jed said.

Many students said the couple used racist and homophobic hate speech. Harshita Ray, a second-year in exploratory studies, said a student of color asked Brother Jed his opinion of people of color and he sang a racist song in response.

“This violence will not be tolerated by OSU students,” Ray said. “This is a perfect example of the systemic forms of violence that exist through practice, which Sister Cindy and Brother Jed are displaying, and policy which has helped Sister Cindy and Brother Jed bring their practices to this campus without the pure consent of the students here at Ohio State University.”

Rand Singer, a second-year in computer science & engineering, said a topless student stole one of Sister Cindy’s signs. When she requested her sign be returned, the students circled around Sister Cindy and Brother Jed, blocking them off from the rest of the crowd.

The group of approximately 150 students surrounded the two on the stage and engaged in heated banter back and forth, chanting “Go home Sister Cindy.”

Ray, who argued with the couple through a megaphone, said the reasons for students being there differed among the crowd. They said some people were there as a form of entertainment or to get out of class, while others wanted to combat Brother Jed and Sister Cindy’s message.

Charley Sullins, a first-year in chemistry, said she thought many of the students were there to watch and enjoy the debate between the students and the speakers.

“It is very entertaining watching everyone scream back and forth,” Sullins said. “They’re saying stuff and then someone screams or someone kisses each other, or it’s just really funny. I think that’s why most people are here to watch, it’s kind of like people-watching.”

Sullins said she disagreed with the message, but acknowledged their right to free speech.

“I like how some people are standing up for themselves when they are saying stuff that’s pretty disrespectful,” Sullins said. “I like seeing the back and forth, depending on how aggressive it is, because everyone has a chance to speak their opinion, and I think it’s fair they get that chance.”