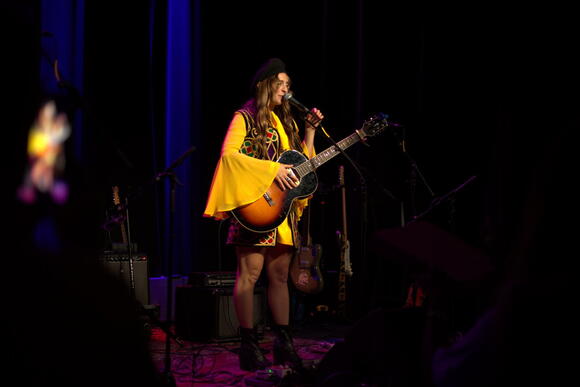 Perley released her new song, “Here For You,” Sept. 30, which is available on all music streaming platforms. After spending the past decade pursuing a career in music, Perley said she wants to keep growing artistically and that Columbus is a great place for her to do so.

“I’ve kind of grown with [Columbus],” Perley said. “I feel like people have supported me through all these different stages of my career, so it feels like a good place to keep developing as an artist.”

According to her website , Perley originally launched her career in 2009, leading the band Angela Perley and the Howlin’ Moons and releasing albums “Hey Kid” in 2014 and “Homemade Vision” in 2016. Perley said she released her first solo album, “4:30,” in 2019, which had a more personal touch than her previous work.

Perley said the transition to solo work has made it more difficult to know where her career is headed, but has also allowed for more creative freedom.

“I make more calls artistically,” Perley said. “It’s really challenging because you put all the pressure on yourself and there is no specific roadmap to anyone’s career and music, so it’s an abstract thing.”

As a local artist, Perley said she has a special connection with her audience and has formed more personal relationships with fans she sees often.

“We’re all growing together in different experiences, and that’s a plus side of being kind of a smaller artist is you’re just definitely like connecting with people and you can’t escape it,” Perley said. “You develop these super cool friendships with people, and so that’s been very special over the years.”

Bobby Cleveland, Perley’s publicist since the release of her 2019 album, said it’s a “real treat” working with Perley.

“She’s very easygoing and lighthearted and just all-around incredibly professional about everything she does,” Cleveland said.

Cleveland said Perley’s music spreads across multiple genres, helping her stand out from other up-and-coming artists.

“She melds a whole lot of genres together, and she’s able to cater to a broad audience,” Cleveland said.

“We’ve been lucky to work with her and she’s definitely proven herself in the indie-Americana crossover world,” Cleveland said.

Vintage-soul singer Miracle Mathis, known by her stage name Miir, said she has known Perley since last summer and has a great deal of respect and admiration for her.

“I used to work at [Natalie’s Music Hall & Kitchen], and at the time, she was performing a lot there, so I started off as a fan, admiring her and watching her,” Mathis said. “Then I actually met her and she was this angel.”

Mathis said she performed with Perley at her Land-Grant Brewing Company show Oct. 14, followed by her performance at the Pelotonia Rock N’ Wheels benefit at Natalie’s Music Hall & Kitchen for the James Cancer Hospital Oct. 15.

Mathis said Perley’s career is a source of inspiration for her, as a fellow artist.

“I really respect her and what she does, and I want to be able to do what she does one day — travel and just work on music,” Mathis said.

Although Perley’s music is hard to describe due to the crossover between genres, Mathis summed it up as a calming, angelic sound.

“I would describe her music as being just very relaxing,” Mathis said. “I always describe her voice as being like angelic, like the voice of an angel, because it’s just so delicate and sweet and it really speaks to your soul.”