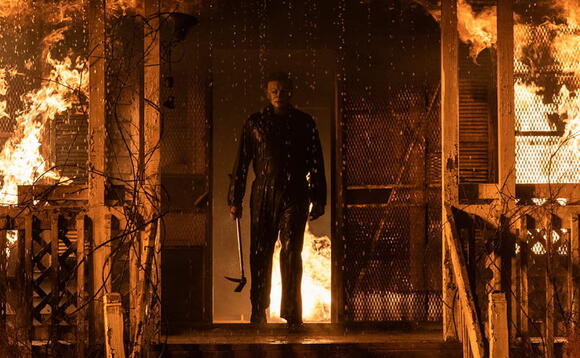 A new addition to the Halloween franchise, “Halloween Kills,” released Oct. 15 and reintroduces many characters included in the original films. Credit: Universal Pictures via TNS

Michael Myers has upheld his murderous reputation for yet another Halloween season.

The notorious “Halloween” franchise, which began in 1978 with the release of “Halloween,” has another addition. The franchise revolves largely around slasher Michael Myers and the ways in which he terrorizes the town of Haddonfield, Illinois. “Halloween Kills,” directed by David Gordon Green and released Oct. 15, reintroduces many characters included in the original films, such as Marion Chambers (Nancy Stephens) and Laurie Strode (Jamie Lee Curtis).

The movie begins with Strode alongside daughter Karen Nelson (Judy Greer) and granddaughter Allyson Nelson (Andi Matichak). On the way to the hospital after an encounter with Myers (James Jude Courtney and Nick Castle), Strode mentions a presumed successful attempt at killing Myers. Although it is anticipated that Strode will have a larger role in the following movie, she spends the duration of this film wounded in the hospital.

“Halloween Kills” introduces survivors who had previous run-ins with Myers, and they are told he is back in the town of Haddonfield. Although Myers had not killed anyone in Haddonfield for years, the idea of him back in town seems to bring about a visceral, communal reaction, as though he had committed a crime just days prior.

The survivors team up, uniting the entire town in an attempt to take Myers down after years of bloodshed. As they rile up a mob, they chant “Evil dies tonight,” which becomes ironic throughout the duration of the movie.

During the manhunt for Myers, Haddonfield residents transform into monsters themselves — becoming extremely violent and forgetting law and order.

In its 106-minute run time, the movie features several scenes involving encounters between Haddonfield residents and Myers. However, the film lacked direction when it came to veteran characters, and most of them were like chickens with their heads cut off on their way to take down a serial killer.

These scenes were often stretched out for extended periods of time and generally took away from the rest of the movie.

However, the idea of Haddonfield residents behaving just as wickedly as Myers was an interesting take, not often seen in movies of this genre. Despite featuring fewer jump scares than some of its predecessors, “Halloween Kills” makes up for this lack of suspense with gore, featuring a large amount of graphic murders.

The plot takes a turn as Myers is finally caught and Chambers’ voiceover reveals the true essence of Myers’ strength. This film portrayed Myers as an almost paranormal being, and although this could be a good move for the series looking forward, the change could use more explanation since Myers’ behavior is attributed to pure insanity in previous movies.

The cinematography in “Halloween Kills” is beautiful and pays tribute to the 1978 film. The movie revisits Myers’ childhood home and includes nostalgia-inducing shots of Myers staring at his reflection through the window of his sister’s bedroom.

Additionally, the music used in the film highlights the scenes on screen well and adds a classic Halloween feel.

Overall, “Halloween Kills” successfully continued the story of Myers’ behavior, and although the supernatural twist could be deemed too much, it makes sense when considering the movie has a sequel to be released in 2022 and had to keep Myers alive somehow. Although some of the scenes seemed unnecessary and lacking in areas, it was an enjoyable enough watch.

This story has been updated to replace Chambers’ name with Strode’s.