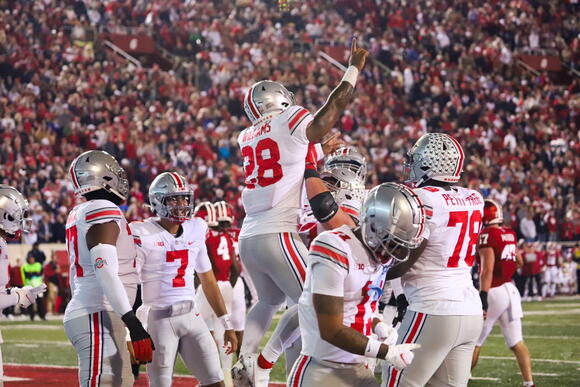 The student section dwindled down to a few dedicated Hoosiers who wanted to stick out the rainy conditions, despite the majority making their way to the exits midway through the second quarter.

Ohio State eclipsed Pittsburgh and Coastal Carolina and is now all alone atop the mountain of scoring offense in the Football Bowl Subdivision.

In each of the last four games, Ohio State scored at least 52 points — up from its 38 points per game in the first three.

The Buckeyes’ quick-strike offense was put on display when they scored six touchdowns during the first half alone in a balanced manner — three passing and three rushing.

Senior tight end Jeremy Ruckert seems to make an impact for Ohio State’s offense in spurts, with his most recent coming on Saturday.

Ruckert became an easy find for redshirt freshman quarterback C.J. Stroud, as the pair linked up five times against Indiana — a career-high reception total for the tight end from Lindenhurst, New York.

Ruckert scored the Buckeyes’ final two touchdowns, toe-tapping a dot from Stroud for his first score late in the first half.

On Ohio State’s second possession of the second half, Ruckert ran a 10-yard out route to the back of the endzone to make for an easy find for Stroud, who was running a bootleg to the same side.

His 11th and 12th touchdowns of his career put Ruckert second all-time on the touchdown receptions list by a tight end,just one away from tying Jake Stoneburner for the program record.

Against the remaining opponents on Ohio State’s schedule, Ruckert has a combined mark of nine receptions for 52 yards and two touchdowns in his career.

Defense got after Indiana quarterbacks It was a sign that it was going to be a long day for Indiana quarterbacks when redshirt junior Jack Tuttle was sacked twice within the first six plays.

Every time a Hoosier play-caller dropped back — whether it was Tuttle, freshman Donaven McCulley or redshirt sophomore Grant Gremel — there seemed to be Buckeyes in the backfield.

The Buckeyes’ rushmen also contributed to a season-high 14 tackles for loss, which aided the defense’s cause in allowing just 128 yards of Hoosier offense.

Now, Ohio State has 24 sacks as a team in 2021, good for second in the Big Ten behind Michigan State and 12th in the FBS.

Jesse Mirco got to see the field

Ohio State’s first offensive possession of the second half was doomed from the start, as Stroud was sacked by Indiana senior linebacker Micah McFadden for a loss of 11 yards on first down.

An incompletion and an 11-yard scamper later, and the Buckeyes were faced with fourth-and-10 at their own 28-yard line and sent the fourth down army onto the field — for the first time since Oct. 2.

Freshman punter Jesse Mirco took the snap from senior long snapper Bradley Robinson, and into the rainy sky it went, traveling 45 yards down to the Indiana 27-yard line.

It seemed harmless as Ohio State was already up 44-7, but it snapped a tremendous streak of 19-straight touchdown drives with Stroud at the helm, not counting when time expired in a half.

The Fremantle, Australia, native has only been called up 14 times in seven games, averaging 44.1 yards per boot with a long of 62.

Now the stretch run begins for the Buckeyes 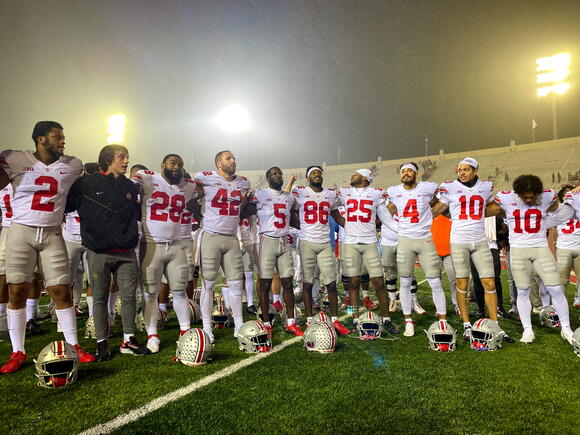 But now, as the weather gets colder, the meat of the Big Ten schedule is in the windshield with the cupcakes in the rearview.

Maryland, Rutgers and Indiana are the three worst teams in the Big Ten East, combining for a 1-11 conference record and 9-12 overall.

The Buckeyes’ remaining five games include bouts with three ranked opponents — No. 20 Penn State, No. 8 Michigan State and No. 6 Michigan — and another with a winning record in Purdue.

Ohio State’s momentum is there, as both units have knocked off their rust of playing together, but now it’ll be put to the test against tougher conference opponents.

In theory, the Buckeyes should control their own destiny to the College Football Playoff. But with the chaos of college football in 2021, their fate is long from determined.

Men’s Basketball: Playing against ‘one of the very best’ in Krzyzewski excites Buckeyes