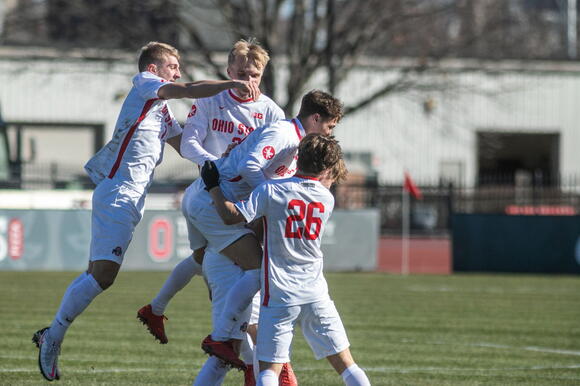 The Buckeyes (5-8-1, 1-5-0) got on the board in the seventh minute off a corner kick from sophomore midfielder Parker Grinstead, who connected with sophomore forward Laurence Wootton for his team-leading fifth goal of the season.

Wootton’s strike snapped a four-game scoreless streak for the Buckeyes, with their last score coming in their 2-1 Sept. 29 victory against Bowling Green.

Head coach Brian Maisonneuve said his team was confident heading into the game that they would find the net and break the scoreless streak.

“The guys knew it was coming, and when you watched the games, you could see it coming,” Maisonneuve said. “The guys were all aware of how good we were playing in between the boxes, it was just a matter of putting it away. To finally find [the net] was huge.”

Ohio State added to the lead in the 17th minute when redshirt senior forward Devyn Etling headed the ball over the leaping Nittany Lion junior goaltender Kris Shakes off a free kick from Wootton.

Etling, who recorded his third goal of the season, said the team’s offensive strategy was to be aggressive and capitalize off of corner and free kicks — also known as a set piece.

“Our goal was to [score off of] set pieces today, and we went in and Laurence scored a great goal off of a set piece,” Etling said. “That just sets the momentum for the game and allows us to settle in and play from ahead. Those set pieces really set the tone for us.”

Although Ohio State controlled the time of possession in the first half and outshot the Nittany Lions 8-6, Penn State (8-6-1, 4-2-0) came out aggressive in the second half, generating eight shots on goal and cutting the lead in half off a strike by junior midfielder Andrew Privett in the 67th minute.

However, the Buckeyes were able to maintain the lead behind a stellar defensive performance by Lawrence, who finished the night with a season-high six saves, including a diving two-handed stop off of an attempt from junior defenseman Alex Stevenson in the 89th minute.

“He was great, he made some big time saves,” Maisonneuve said. “I thought Noah was fantastic, he’s always been an unbelievable shot stopper. But the way he managed the game and the confidence he gave the boys was awesome.”

Lawrence said his performance would not have been possible without the help of his teammates on the back line, as they prevented the aggressive Penn State attack by generating many deflections and turnovers.

“There was a lot of action tonight, so [I have to] give credit to the back line and the whole team in general,” Lawrence said. “We all worked our tails off to get this ‘W.’”

Lawrence is one of seven Buckeye seniors who were recognized as part of senior night festivities.

Maisonneuve said his seniors, who have played in a combined 250 collegiate games, elevated his program and provided a form of leadership that will be hard to replace.

“They’ve done so much,” Maisonneuve said. “The past two years have been so crazy, and these guys did an unbelievable job with the leadership and they really kept the group together. What they did for the team, the program on and off the field, and for the university is hard to put into words.”

The Buckeyes will look to win their second-straight game Tuesday at 6 p.m. when they host rival Michigan at Jesse Owens Memorial Stadium.