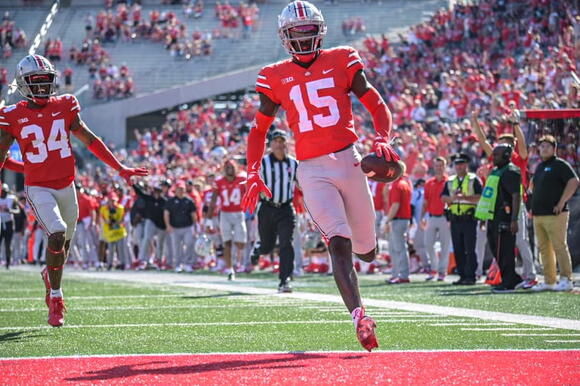 Ahead of Ohio State’s Week 8 matchup against the Hoosiers, Fort Wayne, Indiana, native Craig Young is starting to make his mark for the Buckeyes.

The redshirt sophomore safety recorded his first career interception against Maryland and returned it for a touchdown. A week prior, he recorded his career-high in tackles in a game against Rutgers with five.

Additionally, Young’s snap counts have increased since the start of the season. After recording just six and seven snaps against Minnesota and Oregon, respectively, he registered 14 snaps against Tulsa, 15 against Akron, 25 against Rutgers and 13 against Maryland.

As Young carries the size to be a linebacker — standing at 6-foot-3 and 223 pounds — his speed and quickness allow him to seamlessly transition to the bullet safety position.

“Craig is a 6-foot-3, big guy,” Hickman said. “He’s super fast, a lot of people don’t know that. He’s really fast. He gets to use his speed on certain things like that.”

Another key aspect to Young’s increasing role has been his ability to adjust to changing positions.

Linebackers coach Al Washington pointed to Young’s growth at the position and said he sees his role expanding as the season wears on.

“Another guy who doesn’t have a bunch of reps under his belt, so he’s slowly gaining that momentum that we all need to gain,” Washington said. “I see his role continuing to grow week in and week out.”

Although initially uncomfortable in the early stages of the transition, Young  said he has grown into the role.

“In April, I wasn’t very comfortable. But right now, I feel comfortable. Right now, I’m feeling I’m getting it,” Young said. “It’s all of the help with my brothers and everything.”