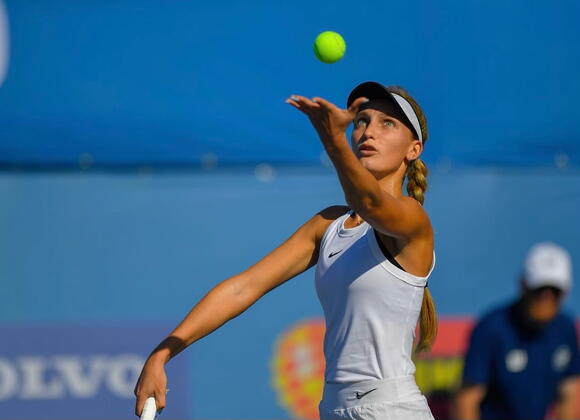 While Cohen entered the facility with intentions of persuading the recruit to play for Ohio State, a player who was not on his recruiting radar caught his eye.

“She was intense, she was into it,” Cohen said. “Just the way she went about her business in practice, it looked like she was taking tennis seriously and she would be somebody who is probably not going to be easy to play against.”

Although Cohen’s initial recruit decided to play for the Miami Hurricanes, that 19-year-old player who captivated him with her competitive fire has made her way to Columbus for the 2021-22 season — where she is competing for the Ohio State women’s tennis team as a 21-year-old freshman.

Growing up an only child in the coastal city of Bat Yam, Israel, Shelly Bereznyak immersed herself in the world of tennis throughout her childhood to keep busy — starting her tennis career at just 5 years old.

“I kind of focused on [tennis] my entire life, I had school and tennis every day,” Bereznyak said. “It was good for me because I don’t have siblings, and if I didn’t do anything, I would become bored.”

As she grew, Bereznyak quickly realized that tennis may be her calling, prompting her to take the sport more seriously and start competitive play in Israel at 8 years old.

“When I was 8 or 10, I knew that I would compete and not do it only for fun,” Bereznyak said. “So, I took it very seriously and practiced every day.”

Bereznyak’s early commitment to the game allowed her tennis career to ascend even further.  At age 14, she began playing in international tournaments for her country’s junior national team.

While the tennis phenom spent five years competing for her home country and elevating her play on the international stage, her priorities shifted after graduating high school.

As part of an Israeli conscription law that requires all citizens over the age of 18 to enlist in the military for a minimum of two years, Bereznyak joined the Israeli army in January 2019, working in the intelligence force.

Bereznyak said her military commitments prevented her from playing consistently in tournaments.

While serving her country and receiving limited tournament chances could have slowed down her tennis career, Bereznyak said her career reached new heights during her service —  winning the Israeli Singles National Championship in December 2019 and earning a perfect individual record in the 2020 Fed Cup.

Bereznyak said the 2019 championship victory is the proudest moment of her already decorated tennis career, which features a 790th singles ranking and a 650th doubles ranking in the Women’s Tennis Association — the highest professional league in women’s tennis.

“It was a very important thing for me and I actually cried after I won the match. It was very exciting,” Bereznyak said. “Before the tournament started, I didn’t think I could win it, and when the tournament went forward and I realized I won it, it was a shock that I actually did it. It’s a title that you like because it’s nice to be an Israeli champion.”

With her military service now behind her, Bereznyak is poised to bring her professional experience and competitive fire to the Ohio State women’s tennis team during her first season with the Buckeyes.

The 21-year-old freshman — who enters the week with a 5-2 singles record in three tournaments — has already impressed her teammates with her polished and versatile play.

“From my experience, playing Shelly is really hard because she is like a wall,” junior Lucia Marzal said. “She doesn’t miss and has a really good backhand, so that’s going to be a nightmare for other teams when they are going to have to play her.”

Being 6,000 miles away from home, Bereznyak said she felt a mixture of culture shock and homesickness when she first arrived on campus in August.

However, with four international players currently on the Buckeyes roster, Bereznyak has received some advice on how to make the cultural adjustment.

“I know how she’s feeling. I know that travelling so far away from your country to study and play tennis is hard,” Marzal, a native of Valencia, Spain, said. “So I’ve been trying to be there for her and introduce her to some of my friends, just being there as a friend and a teammate.”

Entering her third month in the United States, Bereznyak said Marzal and her teammates’ guidance allowed her to find a second home in Columbus and develop lifelong friendships with her teammates and coaches.

“I know that the girls and coaches will have my back,” Bereznyak said. “That makes it easier because I am far away from my family, but I still feel like it is kind of my family here.”