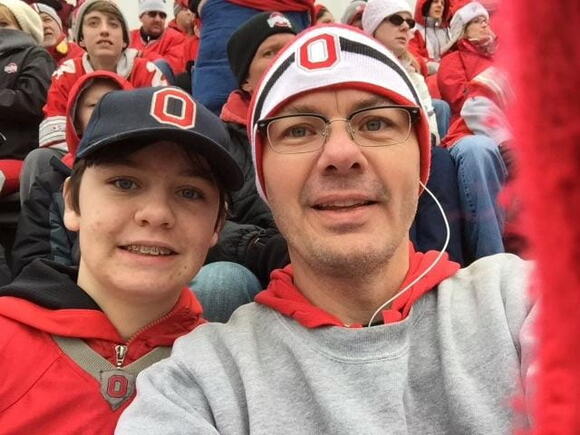 Football culture is a core part of the heart and soul of campus life at Ohio State, and for some students, the family memories associated with the games are a key reason they decided to attend the university.

Both transfer students to the university, Brennan Shanesy and Murphy Horning said their fathers are alumni, they grew up going to football games and for their families, Ohio State is a tradition.

Horning, a third-year in political science, said his grandmother worked for dining services at the Fawcett Center serving meals to the football teams for over two decades from around 1980 to the early 2000s.

When Horning’s father was a child, he volunteered as an usher at Ohio Stadium with the Boy Scouts and went on to attend Ohio State himself, Horning said.

After coming to Ohio State, Horning said he worked for dining services at Curl Market. He said it has been fun exchanging stories with his father and grandmother about their shared work experiences on campus, along with connecting through Ohio State football.

“We watch all the football games,” Horning said. “My dad, he won’t allow us to schedule our weddings on football Saturdays.”

Horning currently works for Scarlet and Gray Sports Radio covering games, which he said is also a topic he bonds over with his father, sometimes over breakfast on Sunday mornings following a game day.

Shanesy, a fourth-year in communication, said his father and two of his cousins attended the university. When watching Ohio State games at home, Shanesy said his father hangs a Block “O” flag in front of their garage, and before the Michigan game, he “blares the OSU fight song throughout the house.”

“My first football game was against [University of Southern California] in 2009,” Shanesy said. “My dad showed me around campus, he showed me where his classes were when he went to Ohio State.”

Shanesy said his favorite game was the Ohio State-Michigan match in 2016, when the Buckeyes beat the Wolverines in double overtime, leading to an “electric” atmosphere in the stadium.

“It was definitely the loudest game I’ve ever been to,” Shanesy said. “I just knew I wanted to go to OSU after that.”

Beyond football, Shanesy said his dad would show him around campus when he was young, which made campus feel like home and inspired him to come to Ohio State.

“After high school, a lot of kids schedule campus tours,” Shanesy said. “I didn’t need to because my dad was my tour guide, and I already knew the campus inside and out.”

Shanesy said he started at the Lima campus but worked hard to transfer for his second year to the Columbus branch because he wanted to follow in his father’s footsteps.

Horning has a similar story. He said he went to Capital University for a year, thinking he would prefer a smaller school, but transferred his second year to Ohio State to take advantage of the communication program — and due to some familial influence.

“The family definitely played a part in me wanting to go to Ohio State,” Horning said. “When I first told my dad about transferring, he’s like, ‘Yeah, you should go.’ ”

Shanesy said shared experiences have brought him closer to his father and he’s glad he came to Ohio State.

“With the amount of football games my dad and I have always gone to, we kind of created a special bond between us,” Shanesy said. “It was always my dream to come to Ohio State, just like my dad did.”