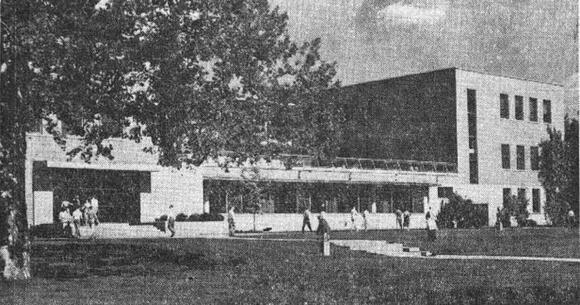 The Ohio Union was in use from 1951 to 2007 after students petitioned for a union where men and women could have equal access. Credit: The Lantern Archives

Ohio State is an evolving giant — and alumni who return to campus may notice some differences both on and off campus.

Tamar Chute, university archivist and head of archives, said the university has undergone physical changes in the last few decades with the expansion of the Wexner Medical Center at Ohio State and rebuilding of the Ohio Union.

Much of what alumni may remember about the area has changed and places where past students would lounge and hang out with friends have vanished, David Staley, an associate history professor and 1993 alumnus, said in an email.

“Being both an alum and a professor at Ohio State has given me a unique perspective on the campus,” Staley said. “I sense both the dramatic changes to the campus and campus life, but I am also appreciative of the continuities.”

Chute said while the Columbus campus hasn’t expanded much since 2001, the relationship between the university and the surrounding area has grown.

“There was, for a long time, sort of this feeling that campus ended at High Street and we took care of what was internal,” Chute said. “In the last 20 years, there has been an understanding that campus really affects the surrounding neighborhoods. There’s sort of this relationship between the two areas that if we don’t care about what happens outside of the official borders, then that is not good for anybody.”

Chute said former University President E. Gordon Gee started Campus Partners , a nonprofit redevelopment organization which helped revitalize the University District, while he was president due to the overcrowding and danger of High Street. With this came the removal of some alumni favorites.

“ What I miss most is Bernie’s and The Distillery. I heard a lot of good music there and ate great bagels,” Staley said. “When that was torn down and replaced, a lot of character was lost on High Street.”

The original Ohio Union was torn down in 2007 and was a major change to the university, Chute said. The Union was dedicated on Nov. 17, 1951, and was seen as a “model for the country,” according to the Office of Student Life’s website .

Staley said he enjoyed spending his time in the old Union with his friends when he was a student.

“The new Union is a fine building, with many amenities, but it does not strike me as the kind of place you go to hang out or lounge around between classes, as my friends and I used to do,” Staley said.

Staley said while the population of the campus has grown considerably since his time at the university, the campus used to feel larger.

“On a warm spring day, the Oval would be packed with students, thousands of students,” Staley said. “I cannot remember the last time I saw the Oval that full of students.”

Despite building renovations and changing presidents, Chute said the “base and heart” of the university has remained the same.