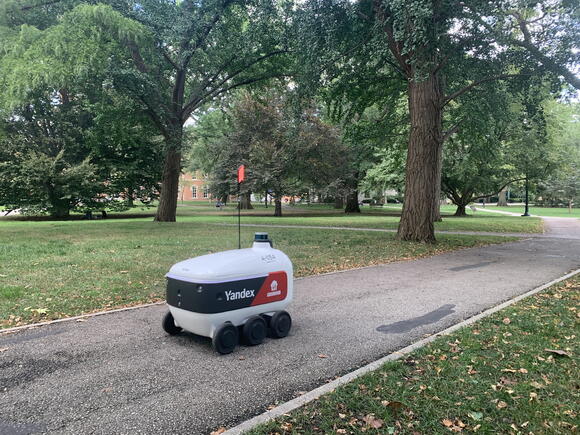 The Grubhub/Yandex food rovers were introduced to Ohio State’s campus this fall and can be seen on the @osufoodrobots Instagram page. Credit: Kathleen Jones | Lantern Reporter

Freshmen, transfer students and those who are inexperienced with campus life due to COVID-19 all have one thing in common: trying to figure out the culture at Ohio State.

Social media accounts geared specifically toward creating a common space for students at Ohio State, such as Barstool, Infringed OSU and OSU Food Robots, do just that.

Barstool OSU , a branch of the national Barstool Sports brand, posts submission-based content ranging from game day shenanigans to fundraising for students affected by crime. With over 117,000 followers on Instagram, 94,800 on Twitter and 43,000 on TikTok, its outreach can be seen all over campus, Caleb Griffin, a graduate student and manager of the accounts, said.

“We are students, we’re a part of this campus and what we really have to offer is we can connect people with people on campus,” he said. “Following social media pages like ours is just a completely more realistic connection to what goes on.”

Griffin, who works alongside five team members, said Barstool OSU’s main goal is to provide a lighthearted, inside look at Ohio State. Jackson Haskins, a fourth-year in biomedical engineering and manager of Barstool OSU, said their content is especially helpful for incoming freshmen who are able to get a glimpse of campus culture.

“The sheer size of social media is important for any school, but I know OSU attracts a lot of people, and that can be very intimidating for some people, especially freshmen coming in,” Haskins said. “It does show you kind of a peek at the culture of the school, more than just what the university wants to show you. You get to really see what goes on.”

Kallyn Buckenmyer, a fourth-year in classics and hospitality management, is the person behind the Instagram account Infringed OSU , a student-specific page that posts Ohio State-related memes, fundraisers for students and news from the university. The account boasts just over 2,200 followers.

Buckenmyer said she was inspired to start the Ohio State-centered social media account by what she saw as a lack of informational student communities online that were supportive of their audience.

“In terms of making things funny and more lighthearted, we didn’t really have that,” Buckenmyer said. “We had the Black Sheep and Barstool, but it was more just, like, making fun of things.”

Buckenmyer said it was important to her to create an account that was a safe space for all students.

“It’s very inclusive and welcome for all people,” Buckenmyer said. “I don’t want anyone to come to my page and be like, ‘Oh, they posted this. I don’t feel very safe or comfortable here anymore.’ ”

Allex Smith, a second-year in city and regional planning, said she and her roommate, Amber Warthman, a second-year in speech and hearing sciences, started the OSU Food Robots account when students returned to Ohio State in August and found themselves face to face with actual robots throughout campus. Since then, the account has gained nearly 7,000 followers.

Smith said the account, which features photos and videos of the food robots roaming campus, facing off with one another and sometimes even driving themselves over the edge of stairs, was originally started as a joke to bring some humor to students’ lives.

Smith said the robots were a common ground among students that lent well to a new, humorous social media account.

“Students from different majors, different clubs, student-athletes –– students from all over campus are somehow connected through these little food robots,” Smith said.

One thing Smith said she likes about social media accounts is their ability to unify those who otherwise would probably not interact.

“I think that they’re just such a small and easy element of campus life that people can get plugged into,” Smith said. “Honestly, if my ridiculous Instagram account gives a struggling first-year something to look forward to, or makes them feel like they’re in on an inside joke, then I think that’s great.”

As technology has advanced, student interactions have changed, and Smith said the best way to keep up is to get on board.

“I think that accounts like [OSU Food Robots] really are a sign of the times,” Smith said. “And I think if that’s the case, why not embrace them?”