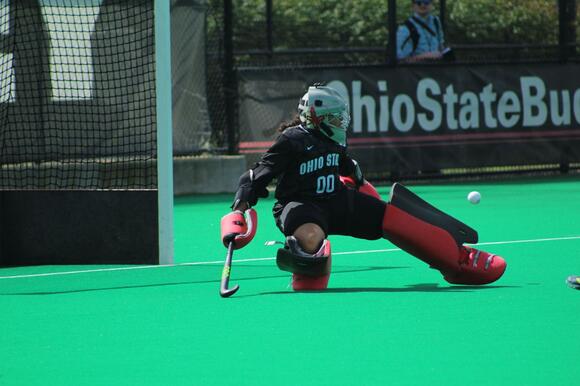 One hundred miles per hour — that is how fast a field hockey shot can reach when it is hit toward the goal. Yet, for Ohio State senior goalie Aaliyah Hernandez, the world slows down for just a moment as she makes the save.

Having quick reactions is important in any sport, but that is a field hockey goalie’s job whenever they take the field.

For Hernandez, though, it is less about having fast reflexes and more about preventing the ball from being shot toward her in the first place by communicating with other players. Hernandez said much of her strategy consists of talking to her teammates to ensure they are all working together on the field.

“One of the main points I take into the game is communication,” Hernandez said. “If my defense knows what I need them to do, then we’re golden.”

In 2018, Hernandez joined the Ohio State field hockey team as a freshman out of Virginia Beach, Virginia.

This season, Hernandez ranks in the Top 5 in the Big Ten in both shutouts and saves per game, of which she averages just over four. Her best performances this year have come against No. 14 Wake Forest and No. 2 Michigan, where she had 10 saves.

Hernandez added that her main goal is to make every ball that comes her way saveable. This allows her to slow down a fast-moving game, making her job as a goalie easier.

This season, Hernandez has already won both a Big Ten and National Player of the Week honors for her September performances against Wake Forest and Appalachian State.

Her shutout against the Demon Deacons was the 11th of her career — and the Buckeyes have only reached the midway point in the season.

Senior back Julia Dickinson, who entered Ohio State in the same year as Hernandez, said the goalie makes her job on defense much easier in how she communicates what is happening on the field.

“I never feel panicked in the backfield, especially with Aaliyah talking to us,” Dickinson said. “As a defender, it really is helpful having someone back there who can see the field and direct us in the right directions when we’re playing.”

Hernandez’s effective communication on the field has led the Buckeyes to a 7-7 record and a No. 19 ranking in the country.

Not only can Hernandez keep up with the speed of field hockey, but she also balances her time playing the game she loves with her studies.

As a biology major hoping to become a nurse anesthetist after graduation, Hernandez has maintained impressive grades throughout her first three years at Ohio State.

Hernandez has been an Ohio State Scholar Athlete twice in 2018 and 2020, while also being Academic All-Big Ten during those same two years.

Hernandez has also been a part of the National Field Hockey Coaches Association National Academic Squad, which requires a GPA of 3.3 or higher, in all her years at Ohio State.

Hernandez said she balances out her schooling and field hockey by working it out in her head and always ensuring that she has time for each.

“I mentally think, ‘OK, how can I focus and divvy up my time in a way that will benefit me in both academics and in sports?’ ” Hernandez said. “I like just respecting field hockey for what it is and respecting academics for what they are.”

Along the way, Hernandez formed great relationships with her teammates and now, as a veteran, is a leader for the team.

Head coach Jarred Martin said that while Hernandez has great skill on the field, she shines off of it as well.

“Off the field, you’ll find a person who’s just a great teammate, and she’s very thoughtful, just to do anything for this team,” Martin said. “She’s been great with that all of her Ohio State career.”