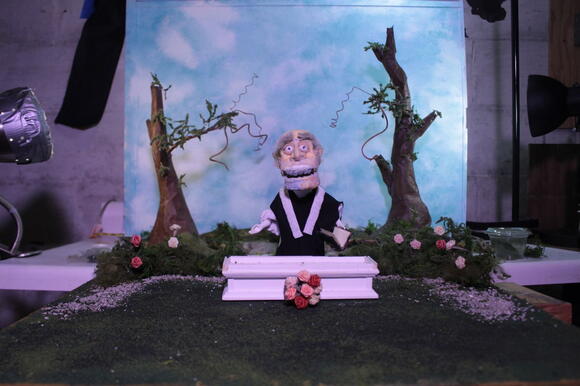 Shot of Tamara Joseph’s creative process, featuring a stop-motion set for a mixed-media film with a priest later to be placed in an animated coffin. Credit: Courtesy of Tamara Joseph

Not everyone can turn a sudden thought or idea into an elaborate film production.

But that is the reality for Tamara Joseph, a fourth-year in neuroscience. The England native writes, stars in and produces her own short films, which all stem from single phrases in her head. From there, Joseph is able to start crafting her story, visualizing her characters and their personalities.

“I get these lines and phrases that don’t mean anything to anyone and they inspire random stuff,” Joseph said. “What I’ll do is spend some time sketching the person saying the line.”

Joseph first became interested in film as a child, but she said her love for it has developed throughout her life, leading her to create and post videos on her website , “Undead Mummy.”

Although some people imagine short films to follow a storyline, Joseph said many of her films are quite ambiguous, with abstract messages and eccentric crossovers of different art forms leaving much to question. Joseph said she most enjoys expressing herself through her art and authenticity.

“My favorite part is when I do it for me and I’m not thinking about anyone else because then I just get to give life to these lines and it means something to me,” Joseph said. “I don’t know if it ever will mean anything to anyone else, but it can be very frustrating trying to make it mean something to someone else.”

Yazmin Soulati, a second-year in philosophy, politics and economics, said Joseph’s work is one of a kind.

“I think they’re so cool and creative, and when I see them I’m like, ‘Wow, I would’ve never thought of anything remotely like this,’ ” Soulati said.

Soulati and Joseph met last year through Mock Trial, a student organization at Ohio State centered around public speaking. Soulati said they instantly hit it off.

“She works so hard, and I admire her so much,” Soulati said. “I want people to see just how hard she works and just how talented she is.”

Leonid Pozdneev, another friend of Joseph’s and Georgia Tech alumnus, said he also appreciates her unique approach to filmmaking.

“She was always very artistic and had a very distinct style,” Pozdneev said. “My favorite thing about Tamara’s artwork is her style.”

Joseph’s friends said her films are rather short and do not tend to follow any sort of comprehensive plot most of the time, but are still striking in their creativity.

“I think people should remove any expectations before viewing Tamara’s work,” Pozdneev said. “Her videos never follow any specific pattern.”

“The Greetails,” one of Joseph’s short films, combines two forms of action and animation, she said. Joseph said that film in particular means a lot to her because its style is more “Disney-like,” features fewer darker elements, compared to her other work, and was a project that she was able to collaborate on with a late friend.

However, Joseph said a more “story-like” film is to be expected in the future. She said the film is in the works, but she is still unsure when it will be ready for debut.

“I’m really excited to feel like for the first time I’ll be able to put something out that the average person will be able to view and be like, ‘Okay, that was a story,’ ” Joseph said.