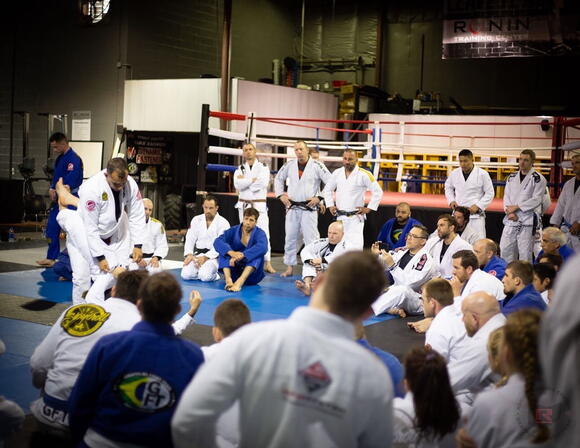 For those who want to take on the world of martial arts, learn how to defend themselves or simply get in shape, a Columbus fitness center offers an array of practices.

Ronin Training Center, located at 1012 W. 3rd Ave. , hopes to not only help people achieve their fitness goals, but also teach crucial self-defense tactics and guide students towards reaching their greatest potential and building self-confidence, according to the center’s website .

In addition to improving health, self-defense is also a focal point of the center, as Hallock said the best self-defense is something that you can incorporate in your life consistently.

Hallock said she started jiu jitsu when she was 15 years old after going to a women’s self-defense class and falling in love with the techniques. Now a black belt in the art, she said she loves to share her knowledge through teaching.

Casey Boyer, owner of SouthPaw Krav Maga, a program held within Ronin Training Center, said he uses an Israeli-based self-defense training art to teach people the skills necessary to get out of dangerous, possibly even life-threatening, situations.

“If you encounter somebody that only speaks violence to get what they want, and you can’t speak that language, there’s a good chance you’re not going to be able to communicate with them,” Boyer said. “So, learning that violence exists in this world, learning that you might be the victim of violence, and that you have the capacity to do something about that, changes the way people think.”

Boyer said self-defense does more than teach people how to protect themselves in physically violent situations, it also allows people to gain strength and courage within themselves.

“It doesn’t just make people safer in a violent situation, but you’ll see people change in terms of how they go about their daily lives, how they hold themselves,” Boyer said. “They stand a little more proud.”

On Nov. 7, from 3 to 5 p.m., Ronin Training Center will hold a women’s self-defense seminar with the purpose of helping women defend themselves and prevent attack situations.

“Women should be in charge of deciding what crosses the line or not,” Boyer said. “Ultimately, No More Nice Girls comes down to not never being nice again, but empowering women to have the ability to decide when they choose to be nice and when they choose not to be nice, and to make sure that it’s up to the individual woman to decide where that line is.”

Hallock said building a healthier, happier, safer and more disciplined community is a primary focus of the center. She said anyone is welcome to come and be a part of the community, whether they would like to better their mental and physical health or learn defense tactics.

“There’s no limitation when it comes to age, skill, lifestyle or anything like that,” Hallock said. “I would like to reach people who need us the most, whether it’s mental health or social health, whatever they need to use it for.”

The Krav Maga program offers classes on Mondays, Wednesdays and Fridays from 6 to 7 p.m. and 7 to 8 p.m., Boyer said. He said the first week of classes for any program at Ronin Training Center is free; classes then cost $79 a month, and after the first official month at Ronin, a membership costs $99 a month, with discounts for students, EMTS, law enforcement and military.