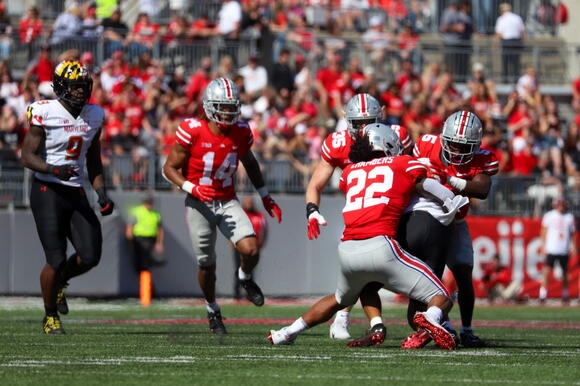 Flipping sides from offense to defense isn’t uncommon in college football, and the Buckeyes have a handful of contributors doing so in 2021.

Redshirt sophomore Steele Chambers is making his move from running back to linebacker appear seamless. Against Maryland, the Roswell, Georgia, native piled a team-high six solo tackles, including sniffing out a Terrapins screen for a stop in the first quarter and a seven-yard sack in the third.

But, everything about the switch isn’t as easy as it seems.

“It’s hard, especially every single week going against our offense,” Chambers said. “But I mean, iron sharpens iron, so they get me better. They get all of us better.”

Chambers earned Ohio State’s Defensive Player of the Game honors and is sixth on the team in tackles.

His recognition represents a culmination of the change in direction the entire Buckeyes defense took after suffering a Week 2 loss to then-No. 12 Oregon and surrendering over 408 yards of total offense over the first three games. Secondary coach Matt Barnes took over defensive play-calling duties and defensive coordinator Kerry Coombs moved from the sidelines to the press box.

Chambers said it took a lot of change to overhaul the defense, and it reflects the Buckeyes’ resolve.

“I think we’re playing with a lot more energy. We’re definitely getting more comfortable with the system that we put in,” Chambers said. “I think we just have more trust in each other that we’ll get our jobs done.”

Head coach Ryan Day said he spoke with Chambers and his family about a potential position switch sometime when the former four-star recruit joined the program. Chambers split time at running back and linebacker during spring practice and joined linebackers coach Al Washington’s room for good during the offseason.

“In order to make a change like that, it has to come from him, in order to be all in — and it did,” Day said. “I think it was a great move. First off, he understands how teams are attacking him because he played on offense. But secondly, he just has a good knack. While he hasn’t played very much, every time he’s playing, you’re seeing him get better.”

Excelling at linebacker isn’t completely new to Chambers; he was a Georgia Athletic Coaches Association all-state selection at the position in high school.

Now, in his first season on defense for Ohio State, Chambers has slowly rediscovered his prowess at linebacker yet again. After recording just two tackles over the first two games, he’s made 17 over the last four with two for loss and as many passes defended.

According to Coombs, Chambers’ instincts are what impresses him most.

“He’s not always right where he’s going yet because he needs that experience, but when he sees it, he goes. Guys like that are fun to coach,” Coombs said. “If he sees it and he goes and he keeps doing that, he’s going to play a lot of ball for the Buckeyes.”

Chambers’ aptitude to understand his role has spread within a nearly brand-new Ohio State linebackers unit this season.

Three Buckeyes linebackers account for spaces among the team’s top five tackles leaders, and sophomore Cody Simon is third on that list. He said Chambers has the “ultimate character,” and wasn’t surprised with how quickly his new defensive teammate made the position switch.

“He inspires me to be the best player I can be. Every day, he’s going full speed, no matter what. He’s a great player,” Simon said. “He can do everything: offense, defense, special teams. He’s done it all. I’m just happy he’s on our team.”

Instead of toting the rock across the line of scrimmage and into the defense, Chambers is now among those who’s stopping the run and making plays.

The position switch hasn’t come easily nor quickly, but Chambers is flashing the ability he once showed that earned him a scarlet and gray roster spot in the first place.

“Definitely starting to get a little more comfortable,” Chambers said. “It definitely helps when you have guys like Cody helping me every single week. I’m just trying to do my job, trying to make a difference.”