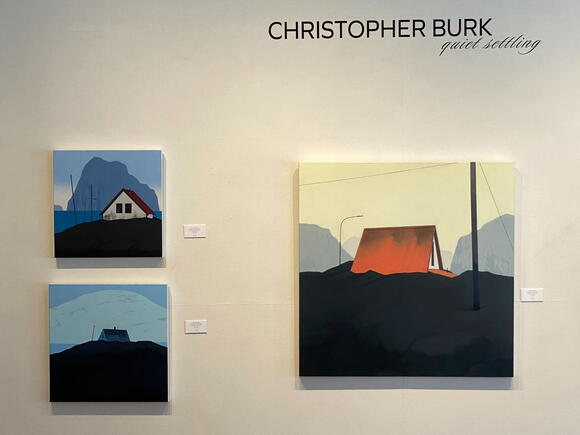 One of the paintings featured in “Quiet Settling” that depicts an Icelandic house encased in volcanic ash. Credit: Courtesy of Christopher Burk.

The exhibition, on display through Oct. 31, features 15 oil paintings of Icelandic homes that are encased in volcanic ash, with each piece serving as a “portrait” of an individual house, Burk said. He said the house is a symbol that has taken on additional meaning after people were isolated in their homes during the pandemic, and he feels he has captured this new meaning in this exhibition.

“There’s so much darkness in the paintings,” Burk said. “I think that’s led a bit by all of the darkness that a lot of us have dealt with in the past 18 to 19 months. Not to make it about that, but I think it’s hard to not have that stuff kind of seep into your subconscious in a way where it does affect the work.”

Burk said he has always loved painting landscapes and wanted to take a less traditional approach when creating this exhibition by highlighting a unique subject.

“I’m really trying to push the idea of what the landscape could be to a viewer,” Burk said.

The first precursor to “Quiet Settling” came approximately two and a half years ago, when Burk created a series of paintings that featured flooded homes seen from a bird’s-eye view. He said he then created the second precursor to the exhibition, a series of flooded pastoral landscapes.

Burk said he was inspired to paint “Quiet Settling” by images of an Icelandic town that existed in the shadow of a volcano and was covered in ash following an eruption in the 1970s.

“They were so stark and so graphic,” Burk said. “The colors of the homes there are not typically what we would see in this country — a lot of reds and, you know, Nordic kind of colors you would think of — and then they’re just surrounded with this black ash.”

The exhibition is on display at Brandt-Roberts Galleries, which has showcased contemporary and modern artwork in the Short North since 2010, Michelle Brandt, owner and director of the gallery, said. She said the mark of a good artist, for her, is someone who has good technique, but also creates perspective-changing work that makes viewers feel something — like Burk.

Brandt said over the past two years, social commentary within art has become more relevant than ever before. She said Burk has managed to incorporate an undercurrent of commentary on climate change into his work.

“It’s been really remarkable to kind of see more artists dive into a little bit of social narrative,” Brandt said. “I think that Christopher Burk, in particular, is one of our artists who very much delves into man versus nature.”

She said Burk is a remarkable artist because of the way he gravitates toward subjects for his paintings that others might overlook.

“It’s not like you walk into every gallery and see a body of work that has, you know, 15 houses buried in ash,” Brandt said. “He takes it, and it’s a heavy scene, but he’s got a way of calming the scene down.”

Burk said he feels the art in “Quiet Settling” encapsulates the beauty that can be found in destruction.

“There is a calmness to it, even though these bad things happened,” Burk said.

“Quiet Settling” will be on display at Brandt-Roberts Galleries, located at 642 N. High St. Admission to the gallery is free. More information can be found on the exhibition’s webpage .