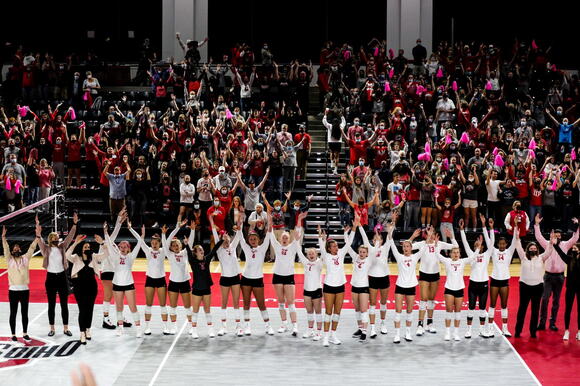 Ohio State’s women’s volleyball team won 3-0 against Rutgers Saturday at the Covelli Center to earn its sixth-straight win in the Big Ten conference and fifth-straight win at home.

The Buckeyes (16-2) held a 14-1 all-time advantage over Rutgers (8-10) and had never lost to the Scarlet Knights at home. The Scarlet Knights came into the match with a 0-6 record in the Big Ten, making them one of two teams without a conference win.

“We wanted to make sure we came out and just set the tone and take it to a team that we should beat on paper,” head coach Jen Flynn Oldenburg said. “I feel like our team had a great mentality coming in and started making runs and chunks of points like we talked about before the match.”

Ohio State came ready to play in the first set as they got off to a quick 7-0 lead to force a Rutgers timeout. Following the timeout, the Scarlet Knights got on the board with help from a kill by redshirt senior middle hitter Shealyn McNamara, 11-5.

However, the Buckeyes did not show mercy, with several big blocks to extend their lead to 17-9. Another block by sophomore middle hitter Rylee Rader forced the Scarlet Knights to take their second timeout, 21-11. After the break, senior outside hitter Mia Grunze had four-straight kills to help Ohio State take set one, 25-13.

The second set started much like the first with an early 4-0 lead for the Buckeyes. However, the Scarlet Knights were able to tie the set up at six with help from two kills by fifth-year opposite hitter Beka Kojadinovic. It stayed point-for-point until the Buckeyes took a two-point edge, forcing a Rutgers timeout at 14-12.

After the timeout, Rader had three kills to help Ohio State keep its two-point edge and force Rutgers to take its second timeout, 18-16. Following the break, the Buckeyes’ outside and middle hitters led the Scarlet Knights’ block to expand their lead and take the second set 25-20.

A dynamic kill by junior outside hitter Jenaisya Moore got the Buckeyes fired up to take an early 5-1 lead in the third set. Ohio State followed up Moore’s kill with a 4-0 run to force Rutgers to take a timeout, 9-2.

After the break, the Buckeyes did not let up their momentum by continuing their run to go up 15-2 and force another Rutgers timeout. Sophomore opposite hitter Emily Londot had an incredible service run to help the Buckeyes get a 23-3 lead. Rutgers fought back with a 3-0 run, but Ohio State won the third set 25-6.

“I’m really excited for this team and where this team can go,” Moore said. “Coming into this game we focused on keeping it in small increments and working to be the first to five, first to 10 and first to 15. I thought we had really good focus and execution and were just really clean.”

The Buckeyes will rest up before getting after it again in practice to prepare to play back-to-back ranked opponents on the road Friday and Sunday, Oldenburg said.

Ohio State will hit the road to take on No. 3 Wisconsin at 9 p.m. Friday in Madison, Wisconsin.

The College of Arts and Sciences restructured its advising system for Fall Semester so students would have one adviser instead of multiple. Credit: Shelby Lum | Lantern File Photo.