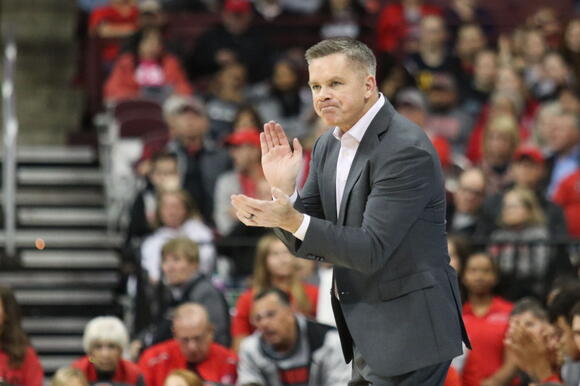 For the first time since 2008, the Ohio State men’s basketball team unveiled its group of captains Tuesday .

The Buckeyes haven’t gone without their team-voted leaders, however. Head coach Chris Holtmann said the team has kept their captains internal and still hosted a captains’ dinner each season.

Forwards senior Justin Ahrens, junior E.J. Liddell, redshirt senior Justice Sueing and graduate Kyle Young were appointed by their fellow Buckeyes to lead them into the 2021-22 season, a campaign where Ohio State looks to rebound from a first-round upset in the NCAA Tournament.

“I think it’s a great honor for those guys,” Holtmann said. “There is a real responsibility to being a captain. It’s an honor to be named.”

The fifth-year head coach said he loves what the Buckeyes football program does in recognizing its group of captains during each preseason, and decided to take a page from Ryan Day’s playbook.

Holtmann added he could’ve capped the number of captains to three instead of four, but with 15 players on the roster, he wanted to make sure there would be ample responsibility shared.

“I’m anxious to see those guys embrace that and take ownership in it because anytime you’re given something like that there’s something required from you,” Holtmann said. “I think the challenge for those guys is when you’re a young player, all you really think about is yourself. You think about, ‘Can I get through this practice? How am I playing?’ You hope as you get older, and certainly as you’re named a captain, your perspective changes.”

Liddell emerges with the least experience from the group, with his third season in the Ohio State program on the horizon. He made a grand impact on the Buckeyes a year ago, earning First Team All-Big Ten honors — the first to do so since Keita Bates-Diop in 2018.

Holtmann said he’s noticed Liddell becoming more vocal during the preseason, and his presence among the Buckeyes has been the biggest noticeable difference since the Illinois native joined the program.

“He’s been really consistent in his work every day,” Holtmann said. “He’s, I think, taking great ownership in being a guy who is raising the energy in the room every time he’s out there.”

Ahrens, Sueing and Young each have over 1,000 minutes played in their careers, and the last two Buckeyes hold more than double that figure. Combined with Liddell’s development, Ohio State will call on the group to lead a team with 10 upperclassmen and just five underclassmen.

Holtmann expects the quartet of captains to take on a heavy load of leadership, and that task soon approaches as the Buckeyes tip off their season against Akron Nov. 9.

“You think about, ‘How are we playing,’ as opposed to, ‘How am I playing?’ They’re still going to be motivated to perform at their highest level, but that perspective changes and should change when you become a captain,” Holtmann said. “I’m excited to see those guys own that.”