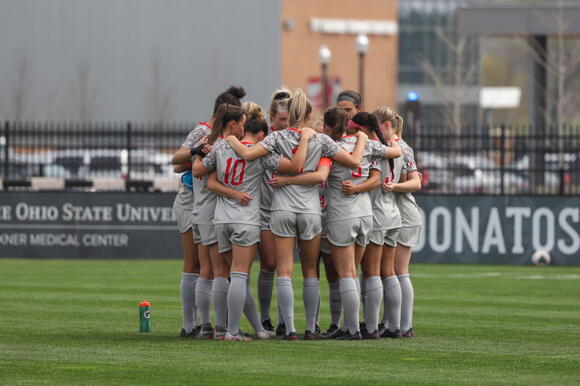 With the change of the weather, another soccer season comes to a close as the Ohio State women’s soccer team rounds out home play this week against Purdue Thursday at 7 p.m. and Michigan Sunday at 2 p.m.

The Buckeyes (7-6-1) are coming off a tough loss on the road against Michigan State in which they held the Spartans scoreless until the 83rd minute when junior forward Lauren DeBeau of the Spartans scored to take the lead, 1-0.

A late penalty shot in the 87th minute was awarded to the Buckeyes, but they couldn’t capitalize, losing to the Spartans 1-0.

“Sunday was a little bit of the wrong mentality,” head coach Lori Walker-Hock said. “We were given a gift with three minutes to go with a penalty kick, and we need to step up and make it a more difficult situation for the goalkeeper.”

Besides looking back at that adjustment, Walker-Hock expects to adjust her lineup back to where she wants it as more players are returning from injury this week.

“As we move players in, we’ll start moving people back where they’re supposed to be,” Walker-Hock said. “As Ari [Pitty] and Peyton [McNamara] are available, it just gives us more depth that we haven’t had in six weeks.”

As the Buckeyes are looking to bounce back after their tough loss, both Purdue (10-2-2) and Michigan (9-2-3) hope to put something together as they are both coming off wins over the weekend.

Purdue is coming off a victory against Minnesota  in which it erased a 2-0 lead by the Golden Gophers to win 3-2 off an 85th minute goal by redshirt senior forward Sarah Griffith, her 11th of the year.

Michigan enters off of a victory against Nebraska, winning 3-2 behind the leg of senior midfielder Raleigh Loughman, who scored two goals in the match.

Both Purdue and Michigan offer a great challenge for the Buckeyes, but senior forward Marissa Birzon said they are happy to play these games at home.

“I’m happy to be back at the Jesse and to get the chance to get a win for the team,” Birzon said.

For many fans it would be easy to look past Purdue and see the shining maize and blue “M” that awaits the Buckeyes Sunday, but both Birzon and Walker-Hock don’t see it that way.

“Our focus is one game at a time,” Birzon said. “Michigan and Purdue are great teams. We have to be our best for every single team.”

Walker-Hock added that this is just a game and the team still has to show up and do their job.

“It’s our last game at home and we want to put all the pieces together and that’s all we do,” Walker-Hock said. “We’ve had a lot of big games this year and for us, the biggest game is the next.”

Purdue is first up this week for the Buckeyes as the match is set to begin at 7 p.m. Thursday, with Michigan coming to town Sunday for a match at 2 p.m.

Both matches are free for fans to attend at Jesse Owens Memorial Stadium and will also be available to stream on Big Ten+.