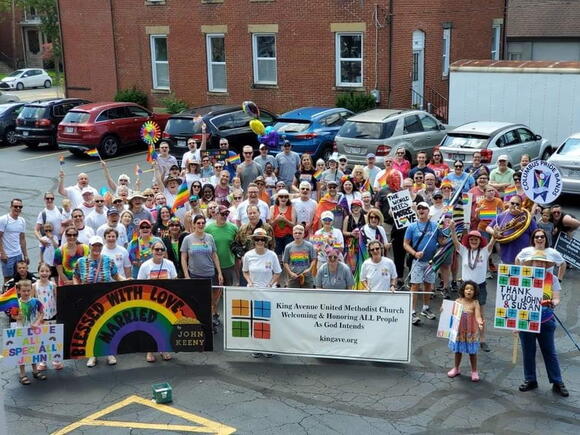 The King Avenue United Methodist Church strives to provide a safe environment of worship for the LGBTQ+ community.

The church, located on King Avenue near Ohio State, has been publicly outspoken about LGBTQ+ rights for almost 20 years, Gwendolyn DeRosa, the church’s director of children and youth education, said. Becky Piatt, the senior pastor of the church, said more than 50 percent of the church community is LGBTQ+ and believes that church belongs to anyone who seeks it.

“I hate that church has kind of been taken away from the LGBTQ+ community,” Piatt said. “Church, at least for me and so many growing up, was important. There was something kind of big in our lives and kind of the mystery of God and faith, and I hate that that was taken away by people, and I just want so much to offer that back.”

Piatt said the church has begun reaching out to more college students to build a larger student ministry and are excited to explore what more they can do with Ohio State.

DeRosa said the church aims to serve as a resource and offer support to students who are  exploring who they are outside of their home environment, particularly in dangerous or unwelcoming situations.

“It’s also really cool for young people to see older LGBTQ+ people that are successful, that are living really wonderful, healthy, happy lives that have awesome partnerships and families and communities,” DeRosa said.

“When you go to King Avenue, you are a part of the LGBTQ community, or you are a super strong ally and advocate,” DeRosa said.

DeRosa said the church’s social group, Spectrum, hosts annual events and participates in pride marches throughout the year. The church hosts a transgender day of remembrance celebration each November to honor all of the transgender people who were killed that year.

“It’s quite an honor to make that kind of safe space for them where they feel like they are welcome and can come in and be totally themselves,” DeRosa said.

DeRosa said King Avenue United Methodist Church believes strongly that God’s message of love is for everybody, and she will continue to be an outspoken advocate for the LGBTQ+ community.

“If I believe God is love, then I have to believe God loves these people and there’s no way that who they are is wrong or bad,” DeRosa said.