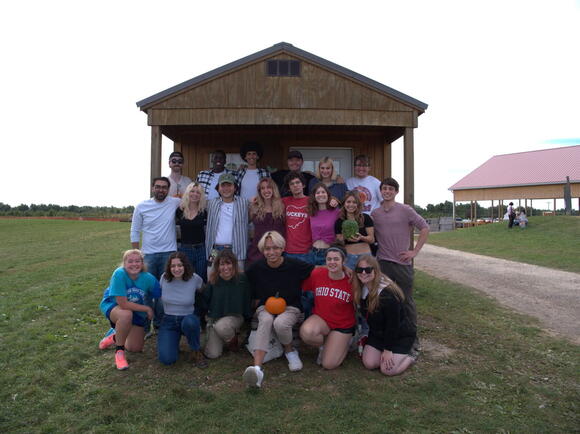 As spooky season nears, some performing arts organizations on campus are working to ensure Ohio State students are in for a treat — not a trick.

Ohio State’s only sketch comedy group, Backburner Sketch Comedy, announced its upcoming production, “The Addams Family Show,” which will be put on Oct. 29 at 7:30 p.m. The club plans to integrate its audience into the show with a Halloween costume contest, and the show comes at a welcome time, Keiya Satoh, a fourth-year in environmental engineering and marketing and communications director for the group, said.

Emmy Pratt, a fourth-year in English and president of the group, said after being limited by pandemic restrictions, members of Backburner Sketch Comedy are relieved to know the future of the organization is bright.

“Being in the pandemic was very difficult for us being able to do comedy, and I was a little bit worried about the future of Backburner,” Pratt said. “I really wanted to make sure it was able to live on after my graduation.”

With their season-debut performance “Ned’s Declassified OSU Survival Guide” taking place last month, Pratt said members of the group were pleasantly surprised at the level of familiarity they felt when returning to “normal” productions.

Backburner Sketch Comedy is now preparing for its newest production, “The Addams Family Show,” and members are finding new ways to develop their comedic skills by incorporating the audience into their show with a Halloween costume contest, Satoh said.

Satoh said the club hopes to make the audience feel like a part of the group by giving out prizes such as pins and T-shirts to audience members who dress up.

However, with the enthusiastic return to normalcy comes a return to the challenges that go hand-in-hand with in-person sketch comedy. Satoh said when the most familiar examples of sketch comedy are professional organizations such as Saturday Night Live, it can feel impossible to meet people’s standards.

“They have the money to make the environment and do all of these different costumes and stuff,” he said. “We don’t have that, so our biggest job is to be able to portray the setting and the details that the audience won’t be able to see because for most of our shows, it’s just a bunch of college students inside of a room just performing.”

Despite these obstacles, a shared passion for simply making others laugh keeps everyone motivated to work hard, Satoh said.

“Laughter is so contagious,” he said. “I don’t understand the science behind it, but I think it’s just beautiful.”

Pratt said establishing meaningful relationships within the group is central to Backburner, and it’s easy to have a great experience with the club, even for those who do not plan on pursuing comedy in the future. However, for those who do want to integrate comedy into their lives and find a place to start, Pratt said Backburner Sketch Comedy is the perfect place.

“There’s no child prodigies at stand-up,” Pratt said. “I think that makes it cool because it’s a skill that you can develop as an adult.”

“I’m just really excited about sort of building that legacy for Backburner and making sure we’re able to, you know, continue on and keep doing sketch comedy for years to come,” Pratt said.

Backburner Sketch Comedy will perform “The Addams Family Show” in the US Bank Conference Theater at the Ohio Union. Admission is free.