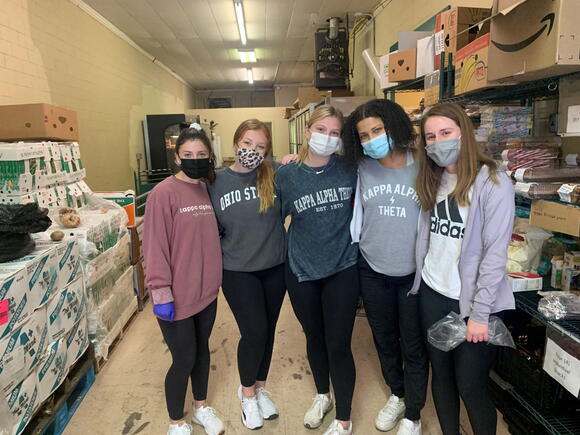 Butler said the pantry was founded in 1965 by a dozen churches around the university, including the Newman Center, which had its own individual food pantries before merging with Neighborhood Services. While they operate primarily as a food pantry, they also provide resources that help people find where to go for services such as IDs and taxes, he said.

The goal of Neighborhood Services is to provide a healthy variety of foods for people each month, Butler said. The pantry serves the entirety of Franklin County twice a month and provides special events for seven zip codes, including the University District.

The pantry works alongside Ohio State to create student programs such as Semester of Service and the Moritz Board Fellows Program , Butler said. This year, they have distributed over 643,000 meals to more than 9,000 families and 30,000 individuals.

Jessica Bainbridge, a law student at the Moritz College of Law and a former volunteer through Semester of Service, said in an email her main role at the organization was to take people around the pantry and help them collect all their food.

“This was my favorite part, as it allowed me to get to know the neighbors that came through,” Bainbridge said.

Bainbridge said meeting and connecting with people who came into the pantry enhanced her experience. She added that Butler played a large role in her enjoyment.

“His constant desire to engage other people in conversation and learn more about them, as well as his selflessness, is really enjoyable to be around,” Bainbridge said.

Bainbridge’s involvement with the pantry extended beyond her undergraduate education. She said in law school she is now a part of the Moritz Board Fellows program where she shadows a lawyer for Neighborhood Services.

Due to the ongoing pandemic, Butler said the pantry has switched to packaged boxes with enough food for five days — geared toward individual diets and cultures. Prior to the pandemic, Neighborhood Services was a choice pantry, meaning individuals could walk around and select their food.

Butler said the pantry works to be where it’s needed. It also sets up pop-up events at places such as schools, so meals are accessible to those with transportation issues.

The pantry will hold events later this fall, including an annual Thanksgiving dinner, which is funded by the Dishin’ for Hunger event at Ohio State.