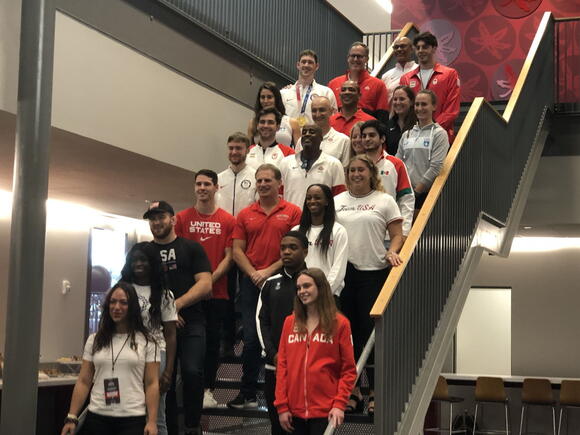 The Ohio State Department of Athletics recognized its record-setting number of Buckeyes who competed in the 2020 Tokyo Olympics during homecoming weekend.

Of the 26 Buckeyes who earned spots in the games, 17 returned to campus Friday and attended a reception honoring their competition. The Olympians were also shouted out at various points during Saturday’s football game against Maryland.

“So proud of them. It’s just a joy to see them here,” athletic director Gene Smith said. “So proud that they represented their families, their teams and Ohio State and central Ohio. It’s really a beautiful thing.”

Friday’s reception allowed a chance for the Olympians to recollect memories from their time spent both at Ohio State and in Tokyo. Former gymnast Alec Yoder, who advanced to the pommel horse finals during the games, said seeing the hard work his fellow Buckeyes put in pay off in Tokyo was among his highlights.

“Grinding day in and day out, especially with a pandemic happening, sometimes it’s hard to see whether it’s all going to pay off,” Yoder said. “Athletes and Buckeyes just put in the work no matter what, and so for us to have that moment where all the work pays off is something that is amazing.”

The Olympic recognition continued into Saturday’s football game where the Buckeyes defeated the Terrapins 66-17 . Each Buckeye appeared on the video boards before a crowd of 99,277 people.

While reflecting on his trip to Tokyo, Snyder said he was grateful for the hospitality shown by coordinators of the games. The former four-time All-American said representing the Buckeyes was a blessing.

“It was cool,” Snyder said. “I feel so blessed that God has given me the talent to be able to compete and kept me healthy. Really thankful.”

Many of the Olympians said they fulfilled their life-long dreams of competing in the games, sharing their joy with family, friends and coaches who’ve been with them along the way.

“I won’t do gymnastics anywhere else except for here at Ohio State. I love it,” Yoder said. “They’ve supported me my entire career here. I got so much love for Ohio State. The ability for me to continue on representing Ohio State on the international level is a dream come true.”