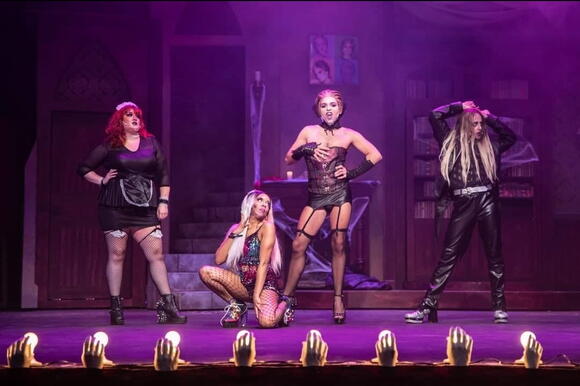 The Short North Stage will present six weekend performances of the Rocky Horror Show, a cult-classic musical following the story of a newly engaged couple and a Frankenstein-style monster named Rocky, Oct. 15 through Oct. 31. Credit: Courtesy of Jerri Shafer.

Energy and participation from the audience is what sets the cult-classic musical “The Rocky Horror Show” apart from other theatrical productions.

The Short North Stage will present six weekend performances of “The Rocky Horror Show,” which follows the story of a newly engaged couple who encounters a Frankenstein-style monster named Rocky among a slew of wacky characters, Friday through Oct. 31. According to the Short North Stage website , the musical has been a tradition in their theater for four years and is a tribute to science fiction and horror B movies, or low-budget motion pictures, from the 1930s through the 1960s.

Joe Gallagher, who will play one of the Phantoms who sing in the chorus, said the first time he did the show three years ago he didn’t know anything about “Rocky Horror” and was surprised by the passionate fan base.

​​”I had never seen the movie or performance of it,” Gallagher said. “I’m just excited to go and get to see people be super passionate and excited again about this thing that we’re doing.”

He said the performances are made all the more exciting by the dedicated fans that show up year after year.

“It’s just got such an intense following,” Gallagher said. “It’s the same people that are coming every year. It’s the fans of the movie that are going to keep it alive for a very long time.”

The audience brings a unique energy to the performance because the show gives attendees a chance to be a part of the production, Miguel Almanzar, who will also play one of the Phantoms, said.

The show has a series of moments where audience members shout along with or respond to the script, which allows for attendees to become a part of the show and bring a lot of energy, Gallagher said.

“People will come dressed up as their favorite characters, and then during intermission, they’ll go and change costumes and then come out as somebody else for the second act,” Gallagher said. “The audience gets very involved with the callbacks, and so every performance is quite different, and it depends on who shows up.”

Gallagher said the show will be entertaining both for returning audience members who know the ins and outs of the show and for those who have never attended.

“There’s no pressure for anybody who has no idea what this is,” Gallagher said. “There’s no expectation to participate, but it is definitely welcome and encouraged.”

Almanzar said the relatability of the show could be one of the reasons it has stayed so popular through the years.

“As humans, we all have dreams and we all want to aspire to be something,” Almanzar said. “‘Rocky’ is one of those shows where at the end it literally tells you if you dream for something, create it, do it, which is really cool, and I think audiences love that and they resonate with that.”

After suspending live performances during the pandemic in 2020, Almanzar said the cast is especially grateful for the opportunity to perform once again.

“It’s so nice to be able to create theater again with people and have that connection because we’ve all been lacking that,” Almanzar said. “Not only as actors are we grateful to be on stage with our other friends and actors, but it’s so nice to perform in front of an audience again, and I’m looking forward to feeling that energy and that joy and that love from everyone.”

“The Rocky Horror Show” will be shown at 11 p.m. on Fridays and Saturdays, and 7 p.m. on Halloween, according to their Instagram . Tickets can be purchased online at the CBUSArts website . Patrons will be required to provide proof of vaccination or a negative COVID-19 test from up to 72 hours prior for entry into the theater, and will also be required to wear masks.