The Lantern16 days ago 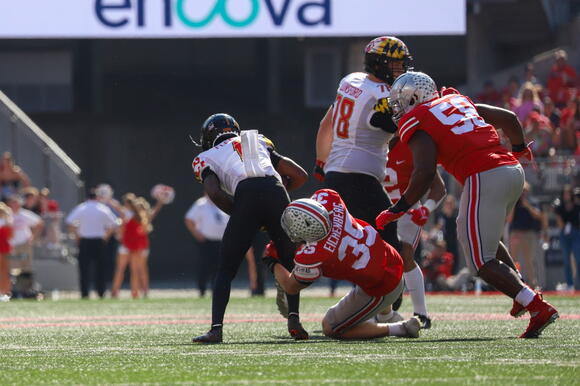 It’s been an interesting season for Ohio State’s linebacker unit.

After seeing adverse performances in the season’s first two weeks and multiple linebackers departing from the program, the No. 7 Buckeyes’ linebackers have largely figured out their issues. Head coach Ryan Day pointed to the unit’s growing experience as a key reason for their improvement since Ohio State’s Week 2 loss to then-No. 12 Oregon.

“Those guys are fitting into their roles now. They understand where they fit and now they have some experience to go back upon,” Day said. “They’re a very serious group and to see them make plays and practice the way they’ve been practicing with their energy, that’s a huge uplift for our whole defense.”

Chambers led the trio with six solo tackles, while being the lone sophomore linebacker to record a sack — which doubled as the first of his career.

As a running back-turned-linebacker, Chambers said he’s grown into his role as the season wears on.

With attention to Chambers’ move to linebacker, Simon said his teammate has been an inspiration to him this season.

“He inspires me to be the best player I can be,” Simon said. “Everyday he’s going full speed no matter what. He’s a great player.”

The Buckeyes’ linebackers played a key role in shutting down Maryland’s rushing attack — which entered the game averaging 152.2 yards per game. The Terrapins were held to just 56 yards, their lowest output of the season.

The game depicted a stark contrast to Ohio State’s Week 2 loss to Oregon, in which they allowed the Ducks to rush for 269 yards.

Chambers pointed to the unit’s heart as a primary reason for their growth to this point in the season.

“It just speaks to our resolve,” Chambers said. “Just being able to come back after that Week 2 loss, it takes a lot of heart.”

Prior to the Maryland game, the Buckeyes defense scored in each of three last three games.

That streak continued against Maryland Saturday, when redshirt sophomore safety Craig Young picked off Maryland junior quarterback Taulia Tagovailoa and took it 70 yards to the house to get the Buckeyes past the 60-point mark.

Focusing on the defensive score, Simon said it takes the whole defense to make big plays like that.

“It’s definitely a combination of the frontend with the backend and really just doing our job,” Simon said. “When we do our job, stuff like that happens.”

As the Buckeyes head into their bye week, Chambers emphasized that the linebackers have continued to grow tighter as a unit as the season progresses.

“We’re playing with a lot more energy. We’re definitely getting more comfortable with the system that we put in,” Chambers said. “We just have more trust in each other that we’ll get our jobs done.”