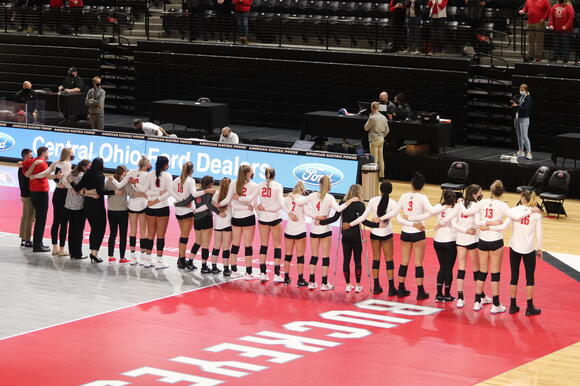 The Ohio State women’s volleyball team won 3-0 over Michigan State  Friday in East Lansing, Michigan. The Buckeyes balanced offensive and tough serving helped them win their first away match of the season.

Michigan State (8-6) got off to a quick start in the first set with junior outside hitter Biamba Kabengele leading the way with three early kills, 6-3. However, the Buckeyes (13-2) were quick to take back the lead with a 6-0 run, 9-6.

Ohio State was able to keep a three-point lead until poor serve receive had the game tied up at 13-all. It was point-for-point before the Buckeyes pulled away with a two-point lead, forcing a Spartans timeout, 18-16.

After the timeout, Michigan State got back within one-point from an explosive kill by senior middle hitter Naya Gros. Once again, the game was point-for-point until Michigan State took its first lead since the beginning of the set to force an Ohio State timeout, 23-22. Following the break, it was tied at 24-all before the Buckeyes got the last two-points to win set one, 26-24.

The second set started with a long rally that was won by Michigan State to help the Spartans take an early lead, 7-3. The Spartans’ tough play combined with the Buckeyes hitting errors gave Michigan State the largest lead of the set 11-6.

Sophomore opposite hitter Emily Londot got her tenth kill of the match to Ohio State get match-point, 24-23. Michigan State fought off match point with a crucial kill by junior outside hitter Cecilee Max-Brown to tie the match 24-all. The Buckeyes had three more match-points before they were finally able to close out the set 28-26.

It was a back-and-forth start to set three until Michigan State took the first lead 11-8. However, the Buckeyes did not waste time catching-up to tie the match at 11-all, forcing a Spartans timeout.

Following the timeout, it was a battle to take the lead with both teams exchanging point-for-point. The Buckeyes were the first to take a lead after a monster block by senior outside hitter Mia Grunze and freshman middle hitter Arica Davis, forcing another Spartans timeout, 19-16.

After the timeout, the Buckeyes did not give up their lead with a 4-1 run, 23-17. Michigan State ended the run from a kill by sophomore opposite hitter Sarah Franklin, but the Spartans were unable to make a comeback. A Buckeyes’ block by Davis ended the match, 25-18.

Ohio State will play Michigan at 1 p.m. Sunday in the Covelli Center.