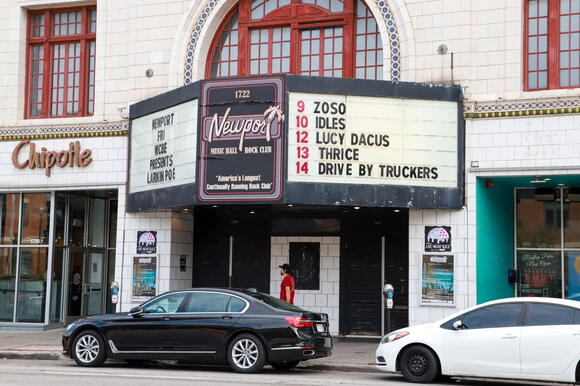 With its short distance from campus and intimate atmosphere, Newport Music Hall has remained a favorite concert-going location for Ohio State students over the years.

Since then, the venue has hosted many musical greats, including Neil Young, Twenty One Pilots, Foreigner and the Red Hot Chili Peppers. The music hall has earned a reputation with the Columbus community as a go-to concert venue for Ohio State students in particular, earning the title of best concert venue from readers of The Lantern.

Located across from the Ohio Union on North High Street, Newport is a stone’s throw from campus. Marissa McClellan, marketing director for PromoWest Productions, said the proximity and history of the venue could be a reason for its continued popularity over the years.

“Being so close that everybody can walk to it is definitely a bonus,” McClellan said. “We’ve been around there for over 50 years now, and it’s just a staple to the community.”

Because the venue has been around for so long, McClellan said Newport’s popularity has likely transferred over generations of Ohio State families.

“I’m sure the students now, their parents remember going to a show there if they went to Ohio State, maybe even their grandparents at this point,” McClellan said. “I think that kind of has a lot to do with just the history involved with the venue.”

In comparison to other concert venues in Columbus, such as Express Live! and Nationwide Arena, McClellan said Newport is a moderate size and feels very intimate. She said concertgoers enjoy being up close and personal with bands, and the venue provides that special experience.

Lisa Poffenberger, a fifth-year in data analytics, attended Newport Friday to see Walk The Moon, a rock band from Cincinnati. She said the smaller size of Newport makes for a better experience.

“It’s a smaller concert venue that has smaller bands and names, but it’s still really fun,” Poffenberger said. “I almost prefer it to a really big concert because it’s more intimate.”

Poffenberger said she thinks Newport’s location on High Street has led to its popularity with the campus community, particularly considering how close it is to dorms and popular nightlife spots.

Abigail Kapcar, a second-year in electrical and computer engineering, also attended the Walk The Moon show Friday. She said she goes to Newport because of its proximity to campus, giving her the ability to see what’s going on at the venue just by walking past it, as opposed to having to check online or in another manner.

“Part of its popularity is the appeal of it being on campus,” Kapcar said. “The last couple weekends, I’ve seen the tour buses parked next to it, and I saw the huge line of people waiting to get in.”

Another appeal of the venue is the historical feel of the building design, Kapcar said. According to the PromoWest Productions website , Newport has aimed to preserve its historical ballroom architecture.

“It’s really cool because there’s character in the building,” Kapcar said. “Marble stairs near the bathrooms and seeing the ceiling and the old finishes is cool because as cool as it is to go to a modern place like Express, I think there’s something cool being at a historical place like that and thinking about how many bands have played there.”