Keith Frische is a member of the audiovisual scoring system team with Ohio State Athletics. Frische can be seen at different sporting events along with being the audio tester at Ohio State football press conferences. Credit: Mackenzie Shanklin | Photo Editor

Technical issues are common; problems like false wiring and poor connections all contribute to situational errors.

Last Monday’s field hockey game featured an impromptu singing of the national anthem, due to one of those ever-so frustrating errors.

Prior to the field hockey matchup between the Buckeyes and the Louisville Cardinals, the event proceeded as normal through pregame introductions and announcements.

“There’s a script for general announcements prior to the game along with lineup and announcing the starters for each team,” Ohio State field hockey sports information director Michael Basford said. “At this point, it seemed like another normal game day.”

Following the announcements of the lineups, it came time to stand for the national anthem, as is customary for all Ohio State sporting events.

“Everyone rises and at this point, our fan experience unit worker is on the computer. The computer is what cues all the pregame music and anything along with that nature,” Basford said. “They get the official cue to start the anthem — and nothing happens.”

As that constant, pregame staple failed to fill the field, Basford said the spectators began to get antsy.

“It’s 30 seconds without the music playing and when you’re standing for the national anthem, those 30 seconds feel like 30 minutes,” Basford said.

The computer failed to play the pre-loaded national anthem. The next option in their troubleshooting methods was to use Spotify and play the anthem from the computer.

Unfortunately, the press box located at Buckeye Varsity Field is the only press box on campus that doesn’t have Wi-Fi access.

At this point, Keith Frische, a member of the audiovisual scoring system team with Ohio State Athletics, suggested using a phone dongle to stream the anthem.

“I thought, ‘Why not use the phone dongle?’ We always have it around and it was laying on the PA table earlier,” Frische said.

The dongle was nowhere to be found.

With the situation escalating even further, Frische proposed one final solution.

“I looked at Caroline [Brentz], who was the event manager, and Mike Basford and said, ‘Well hey, I could sing it,’ ” Frische said.

Suddenly, the national anthem was ringing out. But rather than the classic playing by the Ohio State marching band, it was Frische’s voice that echoed through Buckeye Varsity Field. 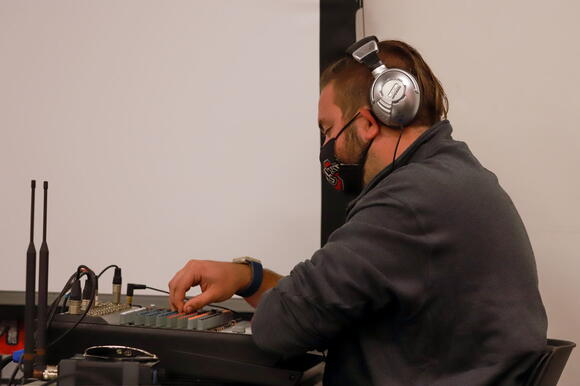 Prior to working with the AVS team at Ohio State, Frische attended Capital University, where he was in the Conservatory of Music.

Frische, who has a degree in music technology,  took four years of voice lessons, music theory and instrumental skills such as the piano.

“My degree in music technology is the reason I have my job now working with the audio systems, sound systems and the whole production behind the music,” Frische said.

Familiar with the spotlight, Frische has performed with choirs as long as he can remember.

“I was really impressed with myself,” Frische said. “I hadn’t sung the national anthem since my senior year of high school, almost 10 years ago.”

The audience cheered after the performance as if that was what was planned for the anthem.

Basford said he was ecstatic to hear Frische’s unknown talent and looks forward to potentially hearing it again.

“We were incredibly lucky he was with us that day, our own personal singer,” Basford said. “He’ll have to be at all our games going forward in case we need our singer again.”

Frische said it was a great experience to sing in front of a crowd again.

“It was a fun moment. I would really sing again if they needed me to,” he said. “Maybe next time around, I’ll have time to prepare for the occasion.”