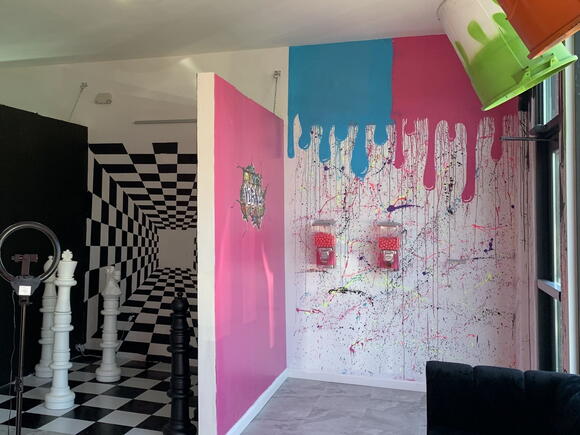 Members of the Columbus community have a new museum to visit, and it’s all about them.

The #Viral Selfie Museum, an interactive art gallery where people can pose and take photos, opened Sept. 11 at 1555 N. Fourth St., just a short walk from Ohio State’s campus. The museum is a Black- and female-owned business and is the first of its kind in Columbus.

Danielle White, the owner of the museum, said she was inspired to open her own selfie museum when she saw a TikTok of one in Detroit.

“I’m a Columbus resident myself, so I saw something that we were lacking,” White said.

The gallery offers more than 19 art installation booths, each with different props, colors and themes. White said customers are welcome to bring their own photography equipment and lighting if they wish.

White said her favorite set is the pink airplane room, which features real airplane chairs from an airport in Cincinnati.

People of all ages are welcome to come in and interact with the sets, and feedback from the public has been overwhelmingly positive, White said.

“A lot of people have been really interested in it, so we’re growing at a good rate,” White said. “Then more people are coming in and sharing it, and we’re getting more and more people.”

SiuMei HauYon, a Columbus resident, said she recently visited the #Viral Selfie Museum to model for her friend, who is a photographer, and HauYon said she liked how new and refreshing the museum felt in comparison to natural photo sets around the city.

“Especially if you do a lot of photography in the area, there isn’t much visually to find in the streets of Columbus,” HauYon said. “There is nature, and of course there are some buildings, but unless you’re in the studio, it’s really hard to get interesting-looking pictures.”

Customers can purchase tickets for one-hour time slots, during which they are free to roam about the museum and take as many pictures as they like. HauYon, who has had some experience modeling in the area, said the #Viral Selfie Museum is a great resource for those who need some new inspiration.

“That place was completely mind-blowing,” HauYon said. “We’re not going to set up anything that looks like that in a studio because it will be like a waste of time and money. So being able to just go somewhere where they have it already set up for you, it’s great.”

The fact that the museum is locally owned also drew her to see it, HauYon said.

“I think that it’s good to support local business around the area because something that I’ve seen a lot is that businesses are very slow right now, and it’s hard for people as it is to get the courage to open up something for themselves,” HauYon said.

The #Viral Selfie Museum is open noon to 8 p.m. Thursday through Sunday. Tickets for adults are $27 Thursday and Friday and $32 Saturday and Sunday. Students can get 15 percent off tickets by using the code “OSU” at checkout and presenting a valid student photo ID when checking in.