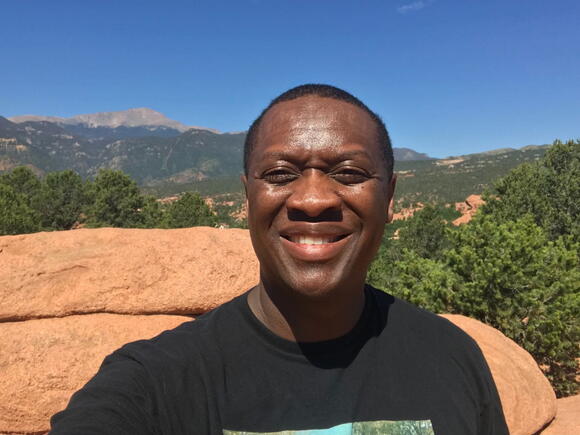 Lanier F. Holt, an associate professor in the School of Communication, was awarded the Donald H. Ecroyd Award for Outstanding Teaching in Higher Education Sept. 9 on behalf of the National Communication Association. Credit: Courtesy of Lanier Holt

Lanier F. Holt said he wouldn’t have wanted to win the Donald H. Ecroyd Award for Outstanding Teaching in Higher Education any other year.

His mother passed away Jan. 29 due to COVID-19, and as her youngest son, he said receiving the award in the same year meant a lot to him.

Holt, an associate professor in the School of Communication, was awarded the Donald H. Ecroyd Award for Outstanding Teaching in Higher Education Sept. 9 on behalf of the National Communication Association. Holt said receiving the award is important to him because it shows how the material he is teaching has a lasting impact on students.

Holt, who teaches crisis communication and crime and the news media, said before teaching he worked for world headquarters at Honeywell, and he freelanced for the NAACP and news outlets such as the Chicago Tribune and Indianapolis Star. He added that becoming an educator was far from his mind at the time.

“It wasn’t whether I thought I would be good at teaching, it was if I was going to go into education at all,” Holt said. “After I took my last final at the University of Minnesota, I never thought I would go back to school.”

Wendy Fernando, director of external affairs and publications for the National Communication Association, said in an email the award is given annually to an educator who “exemplifies superlative teaching in higher education.”

Holt said his goal as an educator is to prepare students for the real world by providing them with information in a way they will remember.

“If you can’t handle my courses, you can’t do this field,” Holt said. “This is literally what you will be doing 18 months from now. If we only give our students theory, then we are doing them a disservice.”

Despite the honor of a national award, Holt said the most important award he has received was the Outstanding Award for Teaching — which was given based on Ohio State students’ votes.

Holt will be presented with the award Nov. 20 at the National Communication Association’s annual convention in Seattle, according to the School of Communication website .