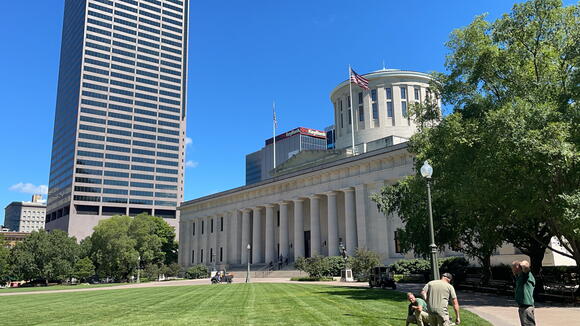 The lawsuit was filed Sept. 27 in the Ohio Supreme Court by the Ohio Environmental Council; the Council on American-Islamic Relations in Ohio — which represents Ohio’s Muslim community, according to its website ; the Ohio Organizing Collaborative, a group that advocates for racial, social and economic equity; and six Ohioans — Pierrette Talley of Toledo, Samuel Gresham Jr. of Columbus, Ahmad Aboukar of Dublin, Mikayla Lee of Columbus, Prentiss Haney of Cincinnati and Crystal Bryant of Cleveland.

“Ohio’s general assembly should fully represent Ohio’s Black and brown communities, not serve as a power trip for one political party,” Jeniece Brock, policy and advocacy director of the Ohio Organizing Collaborative, said in a Sept. 27 press release . “We need a representative and responsive government that hears our communities’ voices on everything from access to healthcare, to student debt, to food and housing security. The maps from the redistricting commission essentially ensure that communities of color in Ohio, like mine in Akron, will not have enough seats at the table to be heard.”

The American Civil Liberties Union, the Ohio chapter of the League of Women Voters and the A. Philip Randolph Institute — an organization for Black trade unionists — filed the first lawsuit Sept. 23. The second suit was filed Sept. 24 by the National Redistricting Action Fund — a nonprofit, left-leaning organization led by Eric Holder, a former U.S. Attorney General who served under former President Barack Obama from 2009-2015.

John Fortney, spokesperson for the Ohio Senate Majority Caucus, said in an email Holder’s involvement, as well as that of the A. Philip Randolph Institute, lectures Ohioans on a “far-left definition of fairness.”

The first lawsuit stated that in 2015, over 71 percent of voters approved a constitutional amendment to end partisanship in mapmaking in Ohio and encourage a bipartisan, transparent process.

“In 2015, the people of Ohio issued a resounding declaration that partisan gerrymandering should have no place in this state. With more than 71 percent of the vote—and

partisan gerrymandering in Ohio and to encourage bipartisanship in the redistricting process,” the first lawsuit states.

According to the Sept. 27 lawsuit, three state-elected officials on the Ohio Redistricting Commission — Gov. Mike DeWine, Secretary of State Frank LaRose and Auditor of State Keith Faber –– will be represented by Attorney General Dave Yost. The two state lawmakers on the commission — House Speaker Bob Cupp, R-Lima, and Senate President Matt Huffman, R-Lima –– have hired private attorneys to represent them.

Aaron Mulvey, a spokesperson for Cupp’s office, said in an email the state is prepared to defend itself in court.

“Lawsuits happen every time there is a new map,” Mulvey said. “We knew this was coming and the state will defend the constitutional maps approved by the Redistricting Commission.”

Cupp and Huffman argued that Republicans are legally justified in awarding themselves somewhere from 54 to 81 percent of seats, given that they have won 81 percent of recent statewide elections.

In their filing, Cupp and Huffman cite congressional redistricting deadlines, the last of which falls on Nov. 30, and also reference an Oct. 30 deadline, by which the commission would be able to draw the maps without the full General Assembly.

The Ohio Supreme Court plans to hear oral arguments Dec. 8, with the scheduling order giving those opposed to the new maps an Oct. 22 deadline to file evidence with the court, and Oct. 29 to file a brief summarizing their case — while state officials will then have a Nov. 5 deadline to file their own brief. Those opposed to the maps listed in the suits have until Nov. 10 to respond.