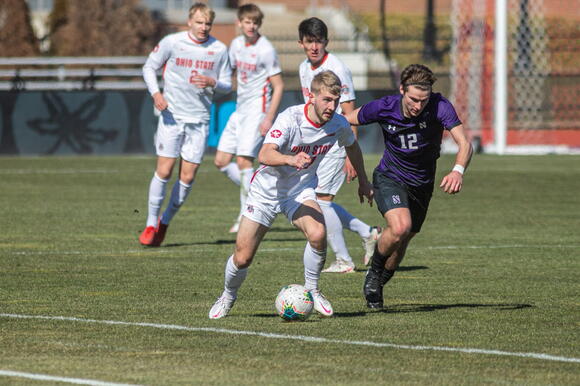 Ohio State lost heartbreakingly to Northwestern 1-0 in Evanston, Illinois, after letting in a goal in the 86th minute Sunday.

The Buckeyes (4-5-1) couldn’t continue to build off the momentum from Wednesday’s victory against Bowling Green as they let in a late goal to give Northwestern (4-5-2) a 1-0 victory. The Buckeyes had opportunities to convert shots into goals, but they couldn’t find the back of the net, leading to an eventual loss.

In the 85th minute, Northwestern’s sophomore forward Justin Weiss received a pass from senior forward Jose Del Valle. Weiss struck the ball just inside the penalty box and got it past Ohio State’s senior goalkeeper Keagan McLaughlin. The goal was the sole decider in the game and came off an Ohio State giveaway.

Ohio State had 18 shots on goal, six of which were on target, but they struggled to place the ball in the back of the net.

The possession battle was in favor of the Buckeyes as they held 56 percent possession compared to Northwestern’s 44 percent.