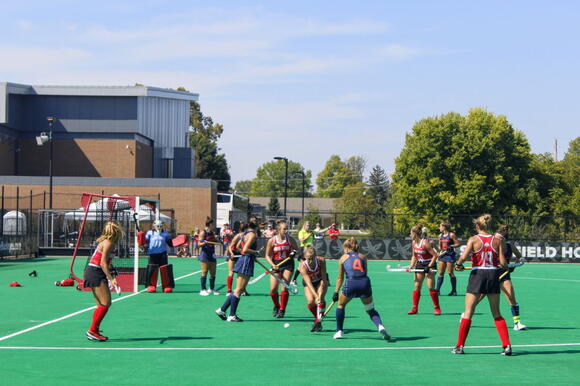 Ohio State senior midfielder Emma Goldean (8) fights for the ball against a Virginia player in the Buckeye goal zone during the Ohio State-Virginia game on Sept. 19. Ohio State lost 1-2. Credit: Sophia Tobias | For The Lantern

Ohio State field hockey renewed its rivalry against Michigan Sunday, but it didn’t come with a winning result.

The classic rivalry between the two programs once again lived up to expectation, as this was the first time the two teams met since last April’s Big Ten Tournament Championship Game.

The game attracted a season-high crowd of 516 in attendance at Buckeye Varsity Field.

The Buckeyes lost their third straight after starting the season 6-1 with a five-game winning streak.

“We played some great teams in both our winning and losing streaks. We have to keep preparing for games like this,” head coach Jarred Martin said.

Southam is the No. 1 scorer in the country, totaling 14 goals. The reigning Big Ten Offensive Player of the Week also leads the country in points per game with 4.50.

Coming into the game, Michigan had one of the most proficient offenses in the country, averaging fiv egoals per game, leading the NCAA. The Wolverines also lead the country in points per game with 13.25.

While the goals didn’t come their way, the Wolverines were in control on the offensive end.

Michigan ended the game with 16 shots and 11 on target. They had seven shots in the third period, resulting in the goal.

“Our defensive side on the ball was great. Michigan is a really quick and athletic team and we played well at that end,” Martin said.

While the Buckeyes played a great defensive game, they couldn’t find their way on the offensive end.

“We knew going against them that we would have a battle on the offensive end,” senior midfielder Emma Goldean said. “We had to take advantage of what we could and unfortunately couldn’t get a goal today.”

This was the first time this season where the Buckeyes were held scoreless. The last time they failed to score a goal was in the Big Ten Tournament Championship game against Michigan as well.

“We were good for a couple passes, but we were rushing things,” Martin said. “We overall couldn’t get anything generated on the offensive end.”

The Buckeyes finished the game with three shots, all coming in the fourth period.

This was the second time Ohio State  used this tactic this season to try to get more offensive opportunities.

“I felt for us there wasn’t a lot of goal-scoring chances. We’ve practiced this and knew the strategy, just couldn’t get the final goal to tie it up,” Martin said.

The Buckeyes continue their five-game stand as they welcome Indiana to Buckeye Varsity Field in Columbus Friday.

The opening faceoff between the Buckeyes and Hoosiers will take place at 3 p.m. and will be streamed on BTN+.