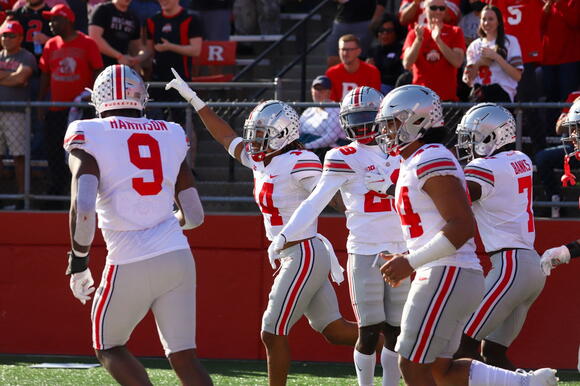 Two weeks ago, freshman cornerback Denzel Burke dove forward and scooped the football from the grasp of Tulsa redshirt senior wide receiver Sam Crawford Jr. for what appeared to be an interception.

Upon review, officials overturned the call into a reception for Crawford, forcing Burke to wait longer for the first interception of his career.

Fast forward to Saturday, Burke made sure to leave no doubt about his first pick. He snagged Rutgers senior quarterback Noah Vedral’s first throw of the second series and returned it for a touchdown not even four minutes into the first quarter.

“It was a big game changer,” Burke said. “I wouldn’t have got the pick without my D-linemen. They sent pressure to the quarterback. I was just happy to be able to make a play and take it to the crib.”

Interestingly enough, Burke said it was the first pick-six of his football career, having not made one in high school when he primarily played as a wide receiver.

The Buckeyes continued to play firmly and with confidence, holding the Scarlet Knights to 142 yards of offense and relentlessly torching Rutgers for 406 yards of their own during just the first half.

Ohio State started nine players who’d been in the program for two or fewer seasons, as the story of its impactful youth continues to build. Head coach Ryan Day has emphasized all season that the Buckeyes need to make up for the reps they’ve missed over the last two years due to veteran depth and loss of time from the pandemic.

Now, with back-to-back convincing victories and a 4-1 record, Ohio State is showing that it is no longer playing with a learning curve ahead of it.

“They’re not inexperienced, they do have games under their belt, so now we know what to expect,” Day said. “We also know what guys can give us meaningful minutes behind them and who needs to continue to work hard to get to where they need to be to become a contributor and to create a role for themselves. We just didn’t have that last year.”

Defensively, the Buckeyes carried the same clamp against the Scarlet Knights that they enforced all game against Akron Sept. 25. Despite allowing a 75-yard touchdown in the first quarter, graduate defensive tackle Haskell Garrett blocked Rutgers’ extra-point attempt.

Thereafter, Rutgers converted just three first downs the rest of the half. The Scarlet Knights recorded 346 yards of total offense when it was all said and done — the second-fewest allowed by Ohio State all season.

“We know what the standard is and what we have to do,” redshirt freshman safety Cameron Martinez said. “We’re just trying to keep working towards that. We’re still not there; we still got a lot of work to do. We’re just going against each other every day and just competing, playing hard and trying to get to that.”

Ohio State made three interceptions Saturday. Two of those picks came from players within their first two years with the program: Burke and redshirt freshman cornerback Ryan Watts. Martinez nearly added his name to the list when the Scarlet Knights faked a punt on the first drive of the game.

Ohio State’s defense is bouncing back after unraveling for three-straight 400-plus yard allowances to start the season. Burke said he feels he and his teammates are building confidence as they continue to get their feet wet.

“We’re just hungry,” Burke said. “We just want to show the world that we’re the Silver Bullets and that we’re going to come hard. I’m happy for my guys and we’ll keep going.”

The Buckeyes are beginning to click after inconsistent showings through their first three games, including a 35-28 home loss to then-No. 12 Oregon in Week 2. Ohio State’s more than a dozen first-year starters are starting to find their groove after back-to-back 50-point outings.

Now perfect through two conference games, Day said the Buckeyes’ plan is to continue to improve as the schedule progresses.

“When you’re doing that, then you know you can put your head on your pillow at night knowing you’re doing the right thing,” Day said. “Having a win like this, it’s given us a little bit of juice now as we head into the next month of October, like, ‘OK, there was some tough times here and we grew through it.’ We didn’t panic, and now we might have a good team as we head into October and November.”