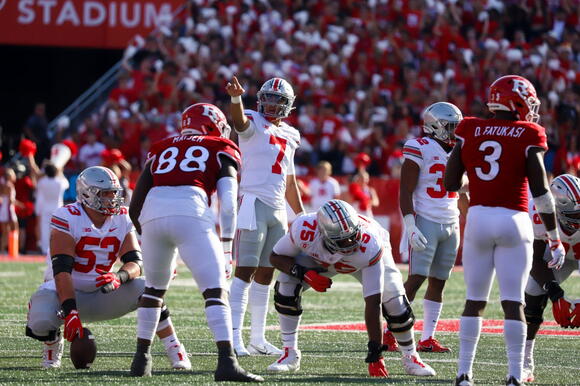 Late in the second quarter, the pocket collapsed on redshirt freshman quarterback C.J. Stroud, but the young signal caller stood tall amidst the pressure.

Slipping away from multiple Rutgers defenders, Stroud uncorked a laser to senior wide receiver Chris Olave while on the run. Then, Olave shifted his way through the Rutgers secondary to find the end zone and cap off a four-touchdown first half from Stroud.

Stroud, who sat out of Ohio State’s Week 4 59-7 win over Akron to nurse an injured shoulder, said he felt much more confident going into the Buckeyes’ Week 5 52-13 drubbing of Rutgers.

“It helped me to take a week off and really step back and realize what position I’m in. This is a big-time university, big-time fan base, a big-time everything. I’m blessed to be in this predicament,” Stroud said. “Really just stepping back this whole week has helped me, not only with rest and being able to throw the ball, but with mentality and being a leader.”

After his week of rest, the Empire, California, native was dominant throughout his time on the field and saw his day cut short in the third quarter after putting the Buckeyes up big.

Stroud tossed five touchdowns while going 17-for-23 and picking up 330 yards against a Rutgers defense that gave up 13.5 points per game going into Week 5.

Head coach Ryan Day praised his young quarterback for shaking off the cobwebs and putting together a dynamite performance in Piscataway, New Jersey.

“I thought it showed during the week. Who knows, maybe it gave him a little perspective watching the game last week, watching meetings, watching practice,” Day said. “We’ll see, but he did play better today. Still a lot of football ahead of us, but it was encouraging to see him play the way he did.”

A big piece of Stroud’s success Saturday was his ability to spread the ball around. Stroud connected with seven different receivers while tossing touchdowns to four different targets.

Olave proved to be his favorite target of the day, hauling in five receptions for 119 yards and two touchdowns.

The senior wideout pointed to Stroud’s ability to make plays as the reason for his emergence Saturday.

“That’s the C.J. we saw in fall camp and in the summer,” Olave said. “He came out, had some rest on his shoulder, and he felt like he was 100 percent. He was doing his thing today.”

Stroud also found Olave’s running mate in the receiving corps — junior Garrett Wilson — for a touchdown in the early goings of the second quarter. The gunslinger found a streaking Wilson across the middle and the Austin, Texas, native did the rest, taking it 32 yards to the house.

Outside of his wide receivers, Stroud got his tight ends involved as well.

Graduate tight end Jeremy Ruckert had his best showing of the season thus far, hauling four catches for 40 yards and a touchdown off the arm of Stroud.

Stroud pointed to his wide variety of targets as the reason for his success Saturday.

“When my teammates look at me, they have the most trust in me,” Stroud said. “Without them, I wouldn’t be anything.”

McCord went 1-for-3, with his lone connection going to sophomore tight end Gee Scott Jr. for a gain of six, while Miller failed to find his target on his only attempt of the day.

With attention to the chemistry in the quarterback room, Stroud said they embody Ohio State’s brotherhood mantra.

“It doesn’t matter who is playing. It could be me, it could be Kyle. I’m going to support, and the rest of the team is going to support,” Stroud said. “It’s no competition, beef or whatever the world may think it is. We all love each other, we’re all here for each other.”

While the Buckeyes began their run through Big Ten play Saturday, Stroud said he recognizes the position the team is in with one loss and added that they’ve begun to turn it up at the right time.

“It doesn’t really matter what the world sees. Like everyone says, even before I got here, it’s Ohio against the world, and that’s true,” Stroud said. “Everyone is counting us out right now, which is good. I feel it’s a great thing because there’s a lot of really weird things going on in college football right now. It’s just preparing us to be great.”