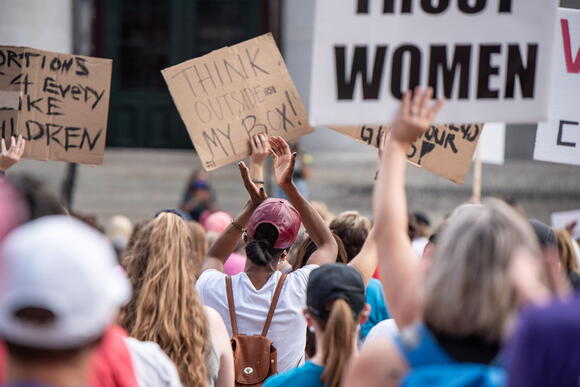 More than 500 protestors attended the “Rally for Abortion Justice” at the Ohio Statehouse Saturday, one of hundreds of demonstrations across the country in the wake of a recent Texas abortion law.

The Columbus rally was part of a nationwide day of action to show solidarity with the people affected by the abortion ban in Texas, according to the Women’s March website . The march promoted access to reproductive healthcare and the protection of legal abortion rights –- which Ohio Senate Bill 123, a trigger bill to ban abortion if the U.S. Supreme Court overturns Roe v. Wade, currently challenges.

Preet Dhillon, a first-year in health sciences, said she decided to attend the rally to advocate for her own rights, especially after women have been protesting on behalf of abortion access for years.

“It happened in Texas and it could happen here, and I absolutely don’t want that,” Dhillon said.

Texas Gov. Greg Abbott signed a law May 19, which took effect Sept. 1, that bans abortions in Texas once the first fetal heartbeat can be detected, which is as early as six weeks, according to AP News . The state also gave power to private citizens to sue doctors or anyone who helps a woman get an abortion.

President Joe Biden’s administration filed a lawsuit against Texas over the law Sept. 8, citing that the law enacted was “in open defiance of the Constitution,” according to AP News .

Roe v. Wade found in 1973 that women have a fundamental “right to privacy,” protecting their choice to have an abortion under the 14th Amendment, according to Oyez , an online archive of U.S. Supreme Court cases.

According to Ohio Law , abortion is legal until a gestational age of 20 weeks is reached.. Anyone who aids in the performance of an abortion after this time period can be criminally charged.

Gov. Mike DeWine previously signed a six-week abortion ban into law April 11, 2019, but was blocked by a federal judge July 3, 2019, according to AP News .

The Ohio Senate Health Committee held its first hearing on Ohio Senate Bill 123, or the Human Life Protection Act, Wednesday. The Republican-sponsored bill would trigger an abortion ban in Ohio if the Supreme Court overturns Roe v. Wade in the upcoming hearing of Dobbs v. Jackson’s Women’s Health in December.

Theo Mirgon, a second-year in English, attended the protest with Nelly Azar, a second-year in computer science and engineering. Mirgon said they protested to protect the rights of all people with uteruses to have an abortion, not just cisgender women.

“This doesn’t just affect women, as Theo said, this affects transgender and gender-nonconforming individuals, as well as people of color,” Azar said. “This is just a great reminder that we need to keep fighting and we need to keep advocating for those who can’t.”

Meghan Geraghty, a second-year in English literature, said as a feminist and a queer woman, she was proud to stand up for all people who lost access to safe and legal abortions. Protesting in front of the Statehouse where politicians pass laws that affect women’s bodies and rights was the best way to spend her Saturday, she said.

The “Harry Potter” concert series was announced in 2016, and since then, over 2.7 million fans have experienced the event. The Columbus Association for Performing Arts will present “Harry Potter and the Order of the Phoenix in Concert” in the spring of 2022. Credit: Courtesy of Randall L. Scheiber.

Local artist Shelley Dawn Johnson, said she began painting within the last year as a distraction from the stress in life. Her collection “Love Stories” will be on display at Wanderlust Studio Saturday. Credit: Courtesy of Tiffany Wedekind.

In partnership with the national Toys for Tots campaign, the Department of Public Safety will hold its 15th annual toy drive Thursday from 7-10 a.m. in front of Blankenship Hall. Credit: Courtesy of Ohio State University.

Signs of academic burnout and how to manage it

With final exams quickly approaching, students may find themselves experiencing burnout and should be mindful of certain symptoms that can be linked. Credit: Ashley Grimmer | Lantern File Photo.

‘A Magical Cirque Christmas,’ a holiday variety show that follows a whimsical storyline about saving Christmas, comes to the Palace Theatre Friday at 7:30 p.m. Credit: Courtesy of Matt Bishop.