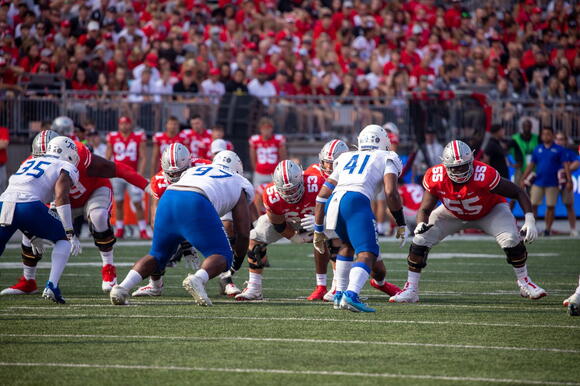 The redshirt freshman center is a Jersey boy at heart and will make his homecoming Saturday when the Buckeyes travel to Piscataway, New Jersey, to battle Rutgers. Wypler said he and his other teammates from New Jersey have brought the state’s culture of toughness to the Ohio State locker room.

“I think coming from that area, coming from Jersey, everyone kind of knows the Jersey, rugged, tough guys,” Wypler said. “I think that mold, we try to bring that here, to our locker room here. We try to pass it along to some of our teammates.”

A native of Montvale, New Jersey, Wypler grew up just over an hour away from Rutgers’ home stadium — SHI Stadium — and sat as a spectator at numerous Scarlet Knights games in his youth.

“Growing up, I was a decent Rutgers fan. My uncle had season tickets growing up,” Wypler said. “I went to quite a few games, but to be honest, I wasn’t a huge, die-hard fan.”

Wypler’s ties to Rutgers don’t end at days of experience at SHI Stadium.

Wypler will make his fifth career start Saturday, as he was thrust into the starting center role due to projected starting junior center Harry Miller being unexpectedly ruled as inactive for the past four weeks.

Miller and Wypler duked it out throughout the summer months and in preseason camp for the starting role, and Miller was very complimentary of his younger teammate.

“I love working with Luke,” Miller said. “Luke is super smart as a young guy and just to talk about blitzes and defenses and what we’re trying to do as an offense. It’s great to work with him and talk with him.”

Although Wypler said he expects some nerves to creep in while playing in his home state, he said the nervousness has largely subsided when it comes to playing in such an important role.

“I think with anything, there will be a little bit of nerves,” Wypler said. “I’m feeling more comfortable in what I’m doing.”

While Wypler has taken over the starting role, he has also moved into a leadership role up front and is typically found at the center of pregame huddles, hyping up his teammates.

“It’s more of learning how my voice needs to be used,” Wypler said. “I just think it was a learning curve of what is expected of me throughout our team and in the locker room and in the huddle.”

Looking at the current Rutgers defense, Wypler will get a look that’s been unfamiliar to him during his young career.

In his first four weeks as the starting center, Wypler has had to primarily face defensive tackles lined up in the zero-technique. But against the Scarlet Knights, he will face a shade look that will put the defensive tackle over his shoulders, rather than head-up.

“I don’t think it’s really going to make too much of a difference because I think the last three weeks have really prepared me well for that,” Wypler said. “I’m just going to go out there and play football and enjoy myself.”

As Wypler prepares to play in front of 200 family members and friends in Piscataway, he said he’s excited to get back to playing in his home state.

“It’s really special,” Wypler said. “A lot of my friends are going to be there, so it’s going to be really fun just playing in front of them.”