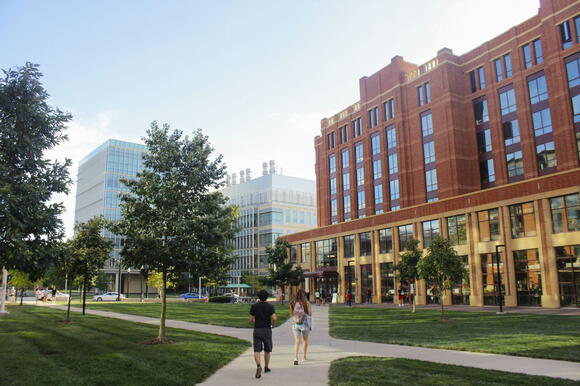 High humidity led to a mold outbreak in six to eight rooms on the seventh floor of Scott House. Credit: Sophia Tobias | For the Lantern

Scott House, a popular residence hall on campus, lost some status among students following reports of mold over the past few weeks.

University spokesperson Dave Isaacs said high humidity led to a mold outbreak in six to eight rooms on the seventh floor of Scott House. Grace Berlier, a second-year in marketing, said she lived in one of those rooms and first noticed mold and reported it Sept. 12.

“My roommate’s shoes were getting really moldy because of the humidity,” Berlier said. “The shoes are damaged to the point where I don’t know that they can be cleaned anymore.”

Berlier said even after maintenance came to replace the affected ceiling tiles, the mold returned a few days later. She said she reached out to the university again and started to feel frustrated.

Berlier said her roommate’s parents got involved and shortly after, they were offered the opportunity to move into a different residence hall and receive compensation for any damaged items. Berlier said they moved out as soon as they could.

Isaacs said the university offered to relocate other individuals affected by the mold as well, but they all declined.

Ross McClain, director of Environmental Health and Safety at Ohio State, worked with the Office of Student Life to address the high humidity levels.

“Our Environmental Health and Safety team assessed the situation and determined remediation steps which included removing ceiling tiles and cleaning the area with an antimicrobial solution,” McClain said. “There is not a health or safety concern, and this issue has been addressed through the quick actions taken by Student Life.”

Although Berlier is happy that the issue is under control, she said she wishes it had been handled differently.

“As a student, the most frustrating part is that they weren’t listening to us, and I think it’s important that students’ opinions are taken and considered without their parents stepping in,” Berlier said. “We’re in college now; we should be able to talk to them. Our opinion should be just as important as our parents’ opinions.”

Any student who experiences problems with their on-campus residence may file a service request at s2f.osu.edu .