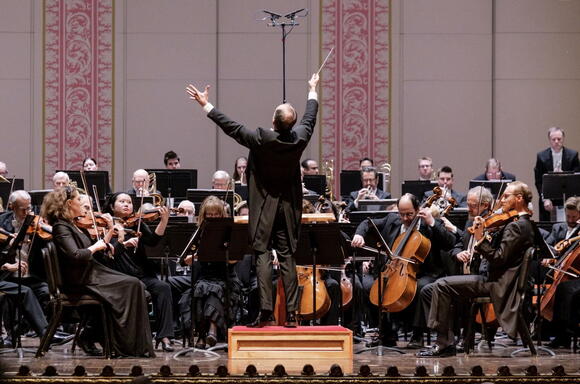 The Columbus Symphony Orchestra during a concert in fall 2020. Credit: Courtesy of Stephen Pariser

The concert, held in the Ohio Theatre, marked a big occasion for the orchestra — the first performance of its 70th season, Denise Rehg, executive director of the orchestra, said. She said members of the orchestra prepared tirelessly for this performance and were met with relief from patrons who were once again able to safely see live classical music.

“The pandemic was both a fearful period and an exciting period of growth for the symphony,” Rehg said.

Although many musical groups were forced to halt performances due to the pandemic, the orchestra received national recognition from organizations such as the New Yorker for their ability to thrive during such a dark and uncertain time, Rehg said.

“It forced us to really think creatively about how we could provide for the community,” Rehg said.

Between increasing the number of local children being served by the orchestra from 20,000 to 60,000, hosting 28 free, outdoor concerts for Columbus residents and forming a partnership with Columbus City Schools in order to integrate music into the third-grade curriculum, Rehg said the orchestra never stopped thinking about how to make a difference in the community.

“The goal really is to make sure that we have opportunities for every man, woman and child in central Ohio to participate with classical music, [and] other types of music, but to have the experiences and the opportunities that music can bring to us,” Rehg said.

Despite still finding ways to stay involved with the community, the symphony decided to stream concerts online and perform without an audience from October 2020 to February 2021, Rossen Milanov, music director of the Columbus Symphony Orchestra, said. During this time, many members struggled to create the same feeling through a screen as they did when they played in person.

“We are like one big family, one big team, and music only happens when we are together,” Milanov said. “We tried several versions of making music virtually, and it was not even close to what the real experience is for us on stage.”

While working carefully to ensure the protection of all symphony members and patrons by enforcing social distancing, requiring masks and limiting audience capacity, the orchestra was able to come together and perform with a live audience once again in February, Milanov said.

Over the past several weeks, the orchestra prepared for the opening concert of the 2021-2022 season and Grammy-winning Fleming, Milanov said. Now, the orchestra is turning its attention to its performance with one of the country’s paramount violinists, Stefan Jackiw.

Jackiw said he is already looking forward to his performance with the orchestra, which will take place Oct. 22 and 23 at 7:30 p.m. at the Ohio Theatre.

“When I walk on stage with an orchestra, the few times that I’ve done it since things have opened back up, it feels like such a warm relief for me, and I can also see that in the other musicians,” Jackiw said.

Jackiw said he always appreciates the feeling of newness that comes with performing with a group for the first time.

“In terms of visiting a new orchestra, that is one of the exciting parts of my life as a traveling musician,” Jackiw said. “The Brahms Violin Concerto, what I’ll be playing, is a piece that I first learned in my late teens and have been playing for nearly two decades now, but it’ll be my first time playing it with this orchestra and this conductor. So, you know, there’s an element of surprise and unpredictability that I always look forward to.”