Football: Burke bursts into spotlight after weeks of strong play 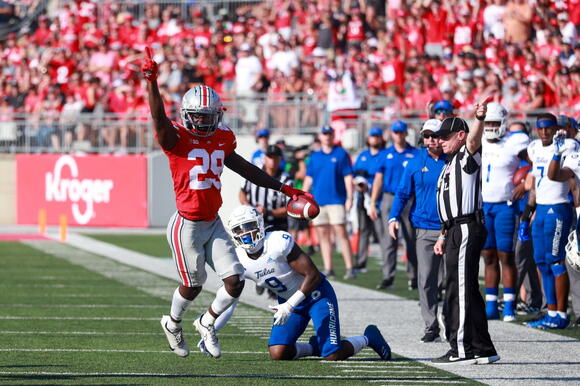 Denzel Burke learned from competing against the best.

The freshman defensive back was thrown into the fire as soon as he arrived in Columbus, battling with Ohio State’s elite duo of receivers: senior Chris Olave and junior Garrett Wilson. Burke said his battles against the top-tiered pair in practices have prepared him to play at the level he’s played to this point in the season.

“I guard the best players in the nation,” Burke said. “Just going against other teams, I really don’t worry too much. I kind of feel settled in. I just know what they’re going to give me is not like what Chris and Garrett are going to give me and the rest of the guys here.”

Burke quickly rose through the ranks in the Ohio State secondary, starting in the Buckeyes’ season opener against Minnesota.

Not only did Burke earn his first start during his first opportunity to see the field, he shined against the Golden Gophers — picking up four tackles while collecting three pass breakups.

Burke said getting the start was a culmination of his entire football career.

“It’s a testament to all the hard work I put in my whole life,” Burke said. “I worked my butt off. I just want to keep going and keep going harder because I still got a lot to prove.”

Since that first game, Burke has continued to be a bright spot in an Ohio State secondary still trying to find his identity.

The Scottsdale, Arizona, native is tied for second in the Big Ten in pass breakups, racking up six on the season.

It appeared that Burke collected his first career interception against Tulsa, when he dug the ball out of the hands of redshirt senior receiver Sam Crawford Jr. while going to the ground. But, the referees overturned the interception, calling Crawford down before Burke ripped the ball out of his hands.

“They said the receiver called the ball, but I definitely had my hands on the ball,” Burke said. “And then when I went to the ground, it was definitely in my possession.”

While Burke has gotten off to a hot start at defensive back, he also spent time as a wide receiver in high school.

Despite splitting time on defense and offense for Saguaro High School, Burke said defensive back was always his true position.

“I’ve always loved corner,” Burke said. “Receiver was more of like a fun thing for me, but defense is my thing.”

Although he has only collected four starts in his young career, Burke said he’s already seen the game slowing down for him.

With his in-game experience building up, he has seen his confidence grow alongside his skill.

“The first game, I was kind of getting into it because I hadn’t played a game since, it was a year since I played my first game, was in high school,” Burke said. “Fourth game in right now, I feel real confident. I got my feet wet, so it feels like high school.”

Head coach Ryan Day said the young cornerback has done everything the right way since he became a Buckeye.

“I think that he’s shown in the games what he’s shown in practice. I thought that they went after him a couple times downfield. He did a really good job in that area,” Day said. “I think for a young player stepping into a couple of these spots, he’s done a good job. The future is bright with him and a bunch of the younger guys that we have.”

While his duels against Wilson and Olave have helped him grow developmentally, his practice opponents have recognized his talent.

Olave said he’s proud of how far Burke has come since his arrival in Columbus.

“I’m a huge fan of Denzel. He’s been balling since camp,” Olave said. “I’m not surprised that he’s played this well so far. I can’t wait to see what he does the rest of the season.”